Mark your calendars  -- September 29 is Michaelmas Day, a day rich in religious and secular traditions in British culture.

A holy day since medieval times,  Michaelmas is also one of Britain’s four “quarter days,” a way to divide up the year. Traditionally, quarter days were when law courts and universities began their terms, magistrates were elected, rents were due, and servants were hired.

Quarter days not only represent holy days on the Catholic/Anglican liturgical calendar, but are closely associated with the change of seasons as well. They are:

The Michaelmas quarter day was especially important because it marked the successful completion of the harvest and signaled the start of a productive new farming cycle.

Like her contemporaries, Jane Austen would have been familiar with quarter days, especially Michaelmas – after all, her father was not only a clergyman but a farmer as well.

Austen mentions Michaelmas in the opening pages of Pride and Prejudice, when Mrs. Bennet gossips about her new neighbor, Mr. Bingley:

“Why, my dear, you must know, Mrs. Long says that Netherfield is taken by a young man of large fortune from the north of England; that he came down on Monday in a chaise and four to see the place, and was so much delighted with it that he agreed with Mr. Morris immediately; that he is to take possession before Michaelmas, and some of his servants are to be in the house by the end of next week.”

In religious tradition, St. Michael the Archangel battled Lucifer and his fallen angels, so as a mighty warrior he's a good choice to  protect mankind against the encroaching darkness, and potentially evil forces, of the autumn and winter. (We all know what kind of evil spirits Halloween can unleash!) 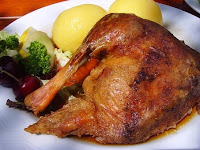 A traditional Michaelmas feast includes a roast goose, along with whatever remains of the just-completed harvest.

Why a goose? Well, as the saying goes: “eat a goose on Michaelmas Day, want not for money all the year.”

Another bit of folklore says you shouldn’t eat blackberries after Michaelmas Day. The reason? Because they were cursed by the devil.

The story goes that when St. Michael threw Lucifer out of heaven, the devil landed on a thorny blackberry bush. In retribution, Satan, not known for his even temper, did all sorts of things to the berries – stomped them, scorched them with his fiery breath, even relieved himself on them – to make the the fruit dry, sour and just plain inedible. 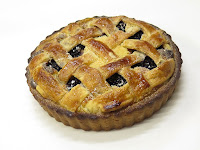 So, along with the goose, a blackberry pie is traditionally baked, to use up all the berries before Michaelmas Day.

Finally, Michaelmas Day is often represented by the Michaelmas daisy. This pretty flower provides a burst of color in autumn that outlasts most other blooms as winter approaches.

“The Michaelmas Daisies, among dede weeds,
Bloom for St Michael’s valorous deeds.
And seems the last of flowers that stood,
Till the feast of St. Simon and St. Jude.”

It makes sense that a Michaelmas daisy, the last flower of the year, is  seen as a symbol of farewell. So, this Wednesday, I’ll get a jump start on New Year’s Day by saying farewell to 2021. (Frankly, it wasn’t that much of an improvement on 2020!) and look forward to a happier and more productive 2022. 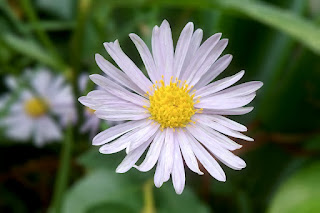 Sources for this post include:
Images courtesy of Wikimedia Commons and Pixabay
at September 28, 2021