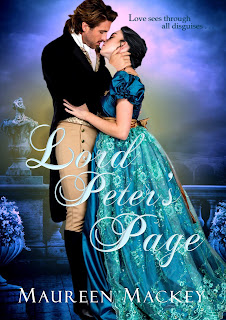 The match between Baron Finbury’s daughter Charlotte and Lord Satterly seems ideal to everyone but Charlotte. She longs for Cyril, the older brother of a friend. Desperate to escape the arranged marriage, Charlotte runs away from her parent’s Mayfair home on the night of a grand soirée to announce her engagement.

Disguised as a boy, she stows away in a carriage bound for Bath, where her sympathetic aunt lives. At the reins is Lord Peter Randolph, son of the Duke of Wickersham, and his friend Geordie. Hidden in the carriage, Charlotte hopes to get to Bath undetected by the men, but a carriage accident and an unplanned night at an inn makes that plan go awry.

Lord Peter soon sees through her disguise, but not before “the boy” proves to be a hopeless assistant, unable to polish a boot or tie a cravat. When Lord Peter discovers his clumsy page is a young miss, he and Geordie go to extraordinary lengths to protect her reputation. They bring her with them to Randolph House, where her presence disrupts another arranged marriage in progress. To make matters worse, Lord Peter’s mother, the Duchess of Wickersham, accuses Charlotte of stealing the family rubies.

As Charlotte struggles to clear her name, she realizes the naïve affection she felt for Cyril is nothing compared to the passion she develops for Lord Peter. But is it too late for Lord Peter’s “page” to win his heart?

Here's what the critics say:

**** "This is one of the best and funniest regencies I have ever read . . . It is a rarity that one finds an author who can make you laugh out loud while never once compromising the discriminating taste of the regency reader . . . LORD PETER'S PAGE has everything a regency fan would expect to find among the best of the genre's writings." - Tell Tale Press

***"LORD PETER'S PAGE is a merry Regency romp with laugh-out-loud dialogue between the hero and heroine . . . I enjoyed LORD PETER'S PAGE enormously, and I'm sure any Regency reader would, too." - Romance Reviews Today
"Mackey not only knows the language of the era, but also holds a special understanding for the flavor of the genre, giving this regency romance a marvelously modern twist . . . Highly recommended!" - Word Weaving
"The plot is intricately woven; charades, intrigue, and more than one developing romance pull the reader through the story without a second thought. I had a very difficult time putting this book down."  - Ivy Quill Reviews
"This delightfully fast-paced, heartwarming story is a pleasant way to spend a cold January afternoon" - Romantic Times
Buy Lord Peter's Page today from Amazon Books!