The Burlington Arcade and the Future of the Shopping Mall

Exactly 200 years ago next week, on March 19, 1819, the Burlington Arcade, a covered shopping mall that was a precursor of today’s malls, opened for business in the Mayfair district of London in the heart of the fashionable West End.

Shoppers must have been dazzled by the 72 two-story units, their first-floor shop windows displaying luxury items for sale. The arcade parallels Bond Street, stretching 196 yards from Piccadilly to Burlington Gardens, another street in central London. The fact that the arcade was built next to the Burlington Estate was no coincidence; it was commissioned by George Cavendish, the first Earl of Burlington.

George’s older brother was William Cavendish, the fifth Duke of Devonshire, whose first wife was the feisty and beautiful Georgiana (this post explores her life). The first Duchess of Devonshire was famous for her political activism at the end of the 18th century, and she was also a style icon of her time. It’s too bad she died in 1806 without getting a chance to shop at her brother-in-law’s establishment.

The reasons why Lord Cavendish wanted to build a shopping mall have grown a little murky with time.

One story is that he built it to prevent people from throwing Regency–era trash and garbage (oyster shells were a problem) over the wall onto his property.

Another reason could have been to provide his wife, Lady Cavendish, an alternative to having to patronize the shops that lined the raucous and unprotected open streets of London that lay beyond the exclusive Mayfair area.

But I wonder if George just was savvy enough to recognize an excellent business opportunity.

From the outset, the Burlington Arcade was designed by architect Samuel Ware to be an upscale shopping destination, providing society's elite with high-end goods such as jewelry, hats, gloves, wine, watches, cigars, lace, and walking sticks.

Fashionable Regency ladies and lords would have been impressed and reassured by the beadles, or officials, that patrolled the arcade to keep order. These beadles have been called “the oldest and smallest police force in the world” (according to Historic UK). In 1819, the beadles on patrol were former members of Lord Cavendish’s regiment, the 10th Royal Hussars.

And apparently, some kind of police force was sorely needed. In its early days, the upper stories of the arcade shops saw a different kind of trade - prostitution.

I imagine that the presence of prostitutes, with the pimps and the pickpockets that worked in league with them, kept the beadles busy.

These law-breakers also explain the codes of conduct the beadles enforced on their rounds. Because prostitutes would warn their pickpocket friends with a whistle when the beadles were coming, whistling was forbidden in the arcade. Putting up an umbrella, carrying a parcel, singing, and playing a musical instrument were, and still are, prohibited activities also.

Today the Burlington Arcade remains an expensive place to shop and beadles still patrol its length maintaining their regulations. Reportedly, the beadles exempt former Beatle Paul McCartney (who's not a beadle but wouldn't it be great if he was both a beadle and a Beatle?) from their strict rules, the only person so favored. Sir Paul can sing, whistle or make music in the arcade. But if I were him I'd be careful about opening an umbrella!

Shopping malls have proliferated since the Burlington Arcade made its much-heralded debut.

But today some people think shopping malls are doomed because of the growing popularity of online shopping.

And when I look around my corner of the country and see mall shops closing and even anchor tenants like Sears going out of business, I understand the pessimism regarding the future of the shopping mall.

But a quick look around the globe shows that the real future of the shopping mall, as this article in Forbes Magazine confirms, lies in its ability to offer consumers much more than just a shopping experience.

The world’s largest malls, located in Asia and the Middle East, cover millions of square feet, but they have more than just stores to offer shoppers. These vast structures include features you might expect, like restaurants and movie theaters, as well as other features that might surprise you, like aquariums, zoos, gardens, gyms, spas, indoor pools and even full-size amusement parks like the one in the Mall of America in Bloomington, Minnesota. You could fit seven Yankee Stadiums inside this US mall, which has been described as more like Disneyland than a shopping center.

Today's malls include venues for concerts, fashion shows, art shows, and other types of performances. The Mall of the Emirates in Dubai even has an indoor ski resort and snow park – an unexpected attraction in the desert.

And malls aren't going away. An impressive number of them have been built since the year 2000, or are currently under construction.

Here’s a list of five of the world’s biggest shopping malls:


And it’s not just size that distinguishes these mega-malls. Mall construction gives architects a license to create some of the most innovative structures the world has ever seen. Here is just a small sampling: 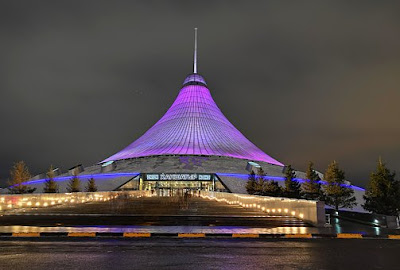 The Khan Shatyr Entertainment Center, located in Astana, Kazakhstan is an energy efficient, LEED-certified building that looks like a gigantic, transparent tent. With an interior space that’s larger than 10 football stadiums, it’s the largest tent and tensile structure in the world. Designed by the architectural firm of Foster and Partners, Khan Shatyr has an innovative three-layer outer envelope that keeps the internal climate comfortable for shoppers, which is important in a region where the temperature outside can vary from -31 degrees to 95 degrees Fahrenheit.

In Nola, Italy, architect Renzo Piano designed Il Vulcano Buono, a shopping mall that’s remarkable for being shaped like nearby Mt. Vesuvius – and also for blending almost invisibly into the landscape. This shopping and arts center is composed of three zones, formed into a set of solid circles, each on its own slope. The zones come together in a conical shape and have reinforced concrete roofs planted with trees and bushes. To see it from a distance, you’d never know that inside the conical, grassy mound is a mall complete with a hotel, spa, cinema, restaurants, and 140 shops. Also, with 8,000 spaces its parking lot is the second largest in Europe. 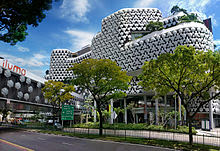 And in Singapore, the outer walls of the Bugis+ shopping mall (formerly known as Illuma) double as a high-tech billboard with a media show rivaling Times Square in New York. At night the undulating facade of this mall comes alive with an ever-moving display of light and images. The walls are made from a material described as "crystal mesh" and the structure was designed by architects from the firm WOHA in conjunction with realities:united, a group of media artists headquartered in Berlin.

None of the malls I’ve discussed would be in business today if there weren’t plenty of shoppers eager to spend their money in them. So, I’d have to say that the concept of a shopping mall, which was a novelty in Regency England when the Burlington Arcade was built, is alive and well two centuries later.

Sources used in this post include:
Images courtesy of Wikimedia Commons, Google Images and Pixabay

Email ThisBlogThis!Share to TwitterShare to FacebookShare to Pinterest
Labels: Architecture