California dreaming and a brief history of glasses 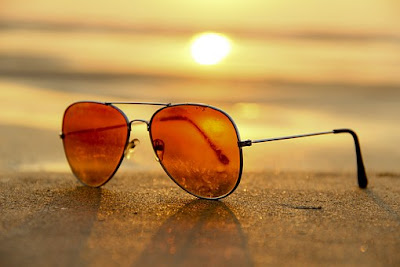 It’s another snow day here in my neck of the Pacific Northwest woods, and I'm looking forward to spring, as I do every wintry February.

As big fat flakes of snow drift through the trees outside my window, I’m dreaming of warm weather and sunshine—specifically of me lying on a beach in California (where I grew up) watching the waves through a pair of gorgeous sunglasses.

Whether they’re used to see better on a sunny day or to correct poor eyesight at any time, glasses have been a necessity and a fashion choice for centuries.

In prehistoric and early historic times, the Inuit people up near the Arctic Circle used goggles made from flattened walrus ivory to shield their eyes from the reflection of sunshine on the snow.

However, these spectacles worked by narrowing the wearer’s field of vision rather than masking the glare.


In ancient Rome, Emperor Nero contributed to the development of eyewear when he held one of his emeralds up to his face during gladiator battles in the Coliseum. Some say the emerald’s clear green depths gave Nero a better view of the action, while other scholars believe the precious stone produced more of a mirror effect.

At about the same time and place in history, the philosopher Seneca, who had bad eyesight, discovered that he could read better if he viewed his texts through a glass bowl filled with water.

The Chinese devised a type of sunglasses in the 12th century. These shades were made from smoky quartz, and effectively darkened the sun’s bright light. They did nothing to correct poor vision, however.

Through the centuries, glass lenses set in wooden circles helped people who needed magnification to read or see objects up close. But it wasn’t until 1440 that glasses to correct nearsightedness (myopia) were created. People either balanced these heavy wooden glasses on their noses or tied them with ribbons to their heads.

The 18th century was a good time for the development of eyewear, both for frames and lenses. In 1728, English optician Edward Scarlett attached short arms to glasses to replace the ribbons that were being used. These arms kept the glasses in place by pressing against the wearer's temples. As you can imagine, this style of frame caused some pretty bad headaches.

Other innovations included a frame that stayed on by squeezing the bridge of the nose, called the pince-nez (literally “pinch-nose”).

Though this style of eyewear was around for centuries, pince-nez became really popular by the end of the 19th and into the early 20th centuries. Many famous people wore them, including President Theodore “Teddy” Roosevelt.

And then there was the lorgnette, spectacles with a handle, also known and used today as opera glasses.

Lorgnettes became more fashionable during the 18th century after English instrument maker George Adams devised a case for them. These glasses were treated more like jewelry than optical necessities and were sold along with other types of glasses in jewelry stores.

Sunglasses as we know them made their appearance in 1752 when another English optician named James Ayscough created the first pair of tinted lenses. He wasn’t trying to protect people’s eyes from the sun; he believed that green or blue lenses improved a person’s vision.

Over in America, Benjamin Franklin is credited with inventing the first bifocals around 1784, though some historians believe he may have gotten the idea from his British friends. He wrote to his buddy George Whatley that he was "happy in the invention of double spectacles, which serving for distant objects as well as near ones, make my eyes as useful to me as ever they were."

And just before the end of the 18th century, probably around 1796, a French blacksmith and ironworker named Pierre Hyacinthe-Caseaux took the same wire he used to make nails and twisted it into something like the frames we use today, which hook behind the ears.

And that brings us around, as always for this blog, to the Regency. Dandies during this era loved to affect a cool indifference to their surroundings, using their single-lens quizzing glasses or monocles to aim their insolent stares at anyone who dared to venture across their line of vision.

Though they didn’t wear sunglasses, Beau Brummell and his fellow dandies were among the first to understand how eyeglasses can be used to establish status and prevent unwanted social interaction—two reasons celebrities wear sunglasses today.

In the 20th century, the types of materials available to construct frames expanded to include celluloid, followed by plastic. These new materials meant that a whole new range of styles and colors in frames were possible.

Sunglasses, in particular, became ultra cool when they were seen on glamorous movie stars and dashing fighter pilots. Indeed, Ray-Ban Aviator sunglasses are still popular today, even though they first hit the market in 1937.

As snow continues to fall outside my window, my sunglasses rest in their case, tucked inside my purse. What I wouldn’t give to need a pair of sunglasses today!

Photos courtesy of Wikimedia Commons and Pixabay
at February 28, 2019

Email ThisBlogThis!Share to TwitterShare to FacebookShare to Pinterest
Labels: Fashions, Science and Technology