Luddites and the Rise of the Machines

Opposition to technological innovation is nothing new. Just look at the Luddites of the early Regency period.

These displaced craftsmen knew first-hand how industrial progress, while it might make money for the business owners, could destroy a person’s livelihood. When these weavers, lace-makers and other textile artisans saw their jobs being taken by unskilled laborers willing to work under harsh factory conditions for low wages, they snapped.

Rallying around the fictitious character of Ned Ludd, the “Luddites” fought back by breaking the frames of new textile machines. But it was really the economic hardship they were experiencing at the hands of the mill owners, not the machines themselves, that ignited the Luddite's ire.

Starting in the spring of 1811, the rioting textile workers tore the country apart; they burned textile mills, destroyed equipment, issued death threats, and in at least one confrontation, killed a mill owner.

The government came down firmly on the side of the factory owners. The British Army was called in, and Parliament used its clout to make destroying factory equipment a crime punishable by death.

According to British historian Eric Hobsbawm, the 12,000 troops deployed to battle Luddites on English soil was a much bigger force than  Wellington brought to the Iberian Peninsula to fight Napoleon in 1808.

And though they lost their cause, the Luddites left their mark on history. Since the Regency, the term “Luddite” has somewhat erroneously come to mean someone who’s threatened by technological progress. In addition, the fears the Luddites had regarding the economic and personal impact of new technology haven’t disappeared, either.

Today, some people are still afraid of new technologies and machines, including computers, which affect our lives. And with mounting concerns about privacy, identity theft, and even election rigging, these fears may have some basis in reality.

With or without a high level of AI, today’s robots have endless applications. They vacuum carpets, harvest crops and mow lawns.

Already a lot of manufacturing processes in the automobile and other industries are automated. Products can now be built, packed, wrapped and delivered robotically.

In addition, robots play an increasing role in hospitals, schools, and the military. These machines can perform surgery or replace human limbs. They’re also invaluable in situations that would be lethal to humans, such as bomb detonation and disposal, or exploring hostile environments like the depths of the ocean, the inside of a volcano, or the surface of a planet.

But as artificial intelligence advances ethical questions are arising. Will robots that can “think” evolve faster and eventually surpass humans, who are limited by the pace of biological evolution? What rules should govern robot behavior, and who will enforce them? Will intelligent machines have any legal rights?

If you believe a machine capable of making autonomous decisions is still in the future, you may be surprised to learn that’s not true. Already there are military robots (and “smart missiles”) that can decide which targets to strike.

And if that doesn’t unsettle you, some robots being developed for the military are capable of seeking out their own power sources. The EATR can refuel itself using vegetation and other organic substances that might be found on a battlefield. However, the EATR may also be able to power itself with chicken fat, which raises disturbing possibilities about how it could keep itself going.

A Luddite from the Regency era who was magically transported to this century would be alarmed by the number of jobs formerly done by humans that are or will be taken over soon by robots. And in the process of all this automation, some human beings are being replaced or marginalized, much like they were during the Regency.

For example, in 2011 the world’s largest iPhone manufacturer, the Taiwanese firm Foxconn Technology, announced a 3-year plan to automate its manufacturing process by replacing existing workers with 1 million robots.

Though this ambitious plan is going slower than expected, the company still claims it will automate 30 percent of its facilities by 2020. If that happens, more than 500,000 Foxconn employees may be out of work.
Bill Gates, no stranger to technology himself, has argued that robots should be taxed, with the government using the money to develop and fund other types of human employment. It’s a good idea, to be sure, but perhaps not one that hard-line capitalists would be willing to entertain. (Now there’s an ethical question!) 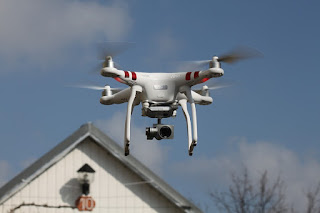 In true Luddite fashion, some people have responded to the perceived threats from galloping technological progress with acts of anti-machine violence, like shooting down drones that fly over their property. (Whether it not it's legal to take out a drone is discussed in this article.)

And technological progress has spawned a new human condition: technophobia.

Technophobia is defined as the fear of advanced technology, including computers and robots. Though some may scoff, I think this fear isn’t entirely irrational in a world where the use of humanoid robots is proliferating, like this firefighting robot developed by the US Navy, or this eerie robocop on patrol in Dubai. (Dubai hopes that droids will comprise 25 percent of its police force by 2030.)

And while some people find robots that resemble people reassuring, others (like me) don’t. We have a type of discomfort or even revulsion known as “uncanny valley” when confronted by these nearly lifelike robots.

The term “uncanny valley” was made up by in 1970 by Masahiro Mori, a Japanese robotics engineer. That’s fitting since Japan uses more robots than any other country in the world.

You could say we’ve been programmed to be fearful of robots (though this fear appears to more common in Western countries). Evil robots have been a recurrent theme in too many science fiction stories and films to count.

Notable examples include the classic novel I, Robot, published in 1949 by Isaac Asimov and the series of Terminator films starring Arnold Schwarzenegger, which began in 1984. (It’s the movie franchise that won’t quit: the sixth Terminator film, Terminator: Dark Fate hits the big screen this November.)

The HBO television series Westworld portrays androids in a sympathetic light. But the movie on which the series is based takes a more sinister view of AI. Here’s a trailer from the 1973 sci-fi classic film, Westworld:


Some people, like the late great physicist Stephen Hawking, believe that the development of artificial intelligence could pose a grave danger to the human race in the future.

That may be true; I hope it’s not. But one thing I’ve learned from history is that progress and innovation can’t be stopped or reversed; at most it can only be managed.

If the best minds of the human race can come together and agree on a way to guide the development and uses of artificial intelligence, AI could prove to be a tremendous boon to mankind. Robots could continue to benefit humans, helping us extend our knowledge of the universe by venturing into places and accomplishing tasks in ways that are beyond mortal limitations.

I believe we can learn to live with this new technology. We have to, because
AI isn’t going anywhere. To paraphrase Arnold Schwarzenegger as the Terminator, no matter how we feel about robots, we can be sure that “they’ll be back.”

And all the Luddite-like protests in the world won’t halt this progress.

Email ThisBlogThis!Share to TwitterShare to FacebookShare to Pinterest
Labels: Science and Technology