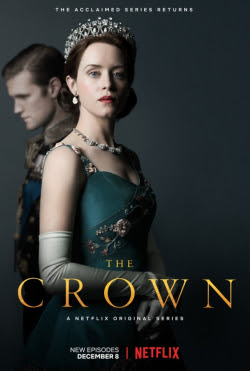 Netflix gave us a great year-end present with Season 2 of The Crown. This series imagines the public and private struggles of Queen Elizabeth II during her reign, with a special emphasis on Prince Philip.

I’d be willing to bet that Season 2, like Season 1, will be a big winner this awards season. The cinematography is dazzling, the costuming gorgeous, and the acting superb. It’s easy to see why a huge budget was needed to pull the whole thing off. (According to Market Watch, its production costs are nearly $130 million, making it Netflix’s most expensive show to date.)

However, this season is not without controversies. It’s ironic that these shows, debuting at roughly the same time as the 70th wedding anniversary celebration of Queen Elizabeth and Prince Philip, stir up old rumors of the Prince’s purported infidelities, which remain speculative and unproven.

The episodes cover the late 1950s through the early 1960s, and address topics such as the Profumo sex scandal, the Marburg files (which detailed the pro-Nazi sympathies and actions of the abdicated King Edward VIII and Wallis Simpson), the marriage of Princess Margaret to Antony Armstrong-Jones, and the 1961 meeting of Jackie Kennedy and Queen Elizabeth at Buckingham Palace, among many others.

As for the historical accuracy of this season, here’s a rundown of fact vs. fiction:
(Warning: this clip touches on all 10 episodes and contains spoilers.)

This is the last season of the show where the Queen will be played by Claire Foy. Variety has confirmed that Olivia Colman, star of the show Broadchurch, will play an older Queen Elizabeth in seasons 3 and 4 of the series.

Who will be cast to replace the other actors in the first two seasons has yet to be announced, though Matt Smith has been dropping hints regarding his replacement. It's hard to imagine someone else as Prince Phillip, but I'm sure whoever gets the nod will do a great job.
Images courtesy of Wikimedia Commons
at January 05, 2018