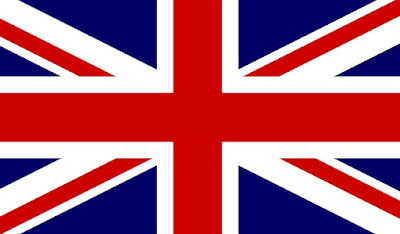 Two things that immediately come to my mind when I think of Great Britain are the first few bars of "Rule Britannia" and that iconic symbol, the Union Jack. So, I think it's appropriate to mention that this week marks an anniversary of the national flag.

January 1, 1801, was the effective date of the Acts of Union of 1800, which merged the Kingdom of England, the Kingdom of Scotland and the Kingdom of Ireland into a single political entity. And on that same date, the Union Jack became the official emblem of the newly United Kingdom.

Here’s a clip that visually explains the Union Jack’s design in less than a minute, along with how to fly the flag right side up:

The word "Jack” in “Union Jack” most likely has a nautical origin. In the Royal Navy, flags are hoisted on a ship’s “jackstaff” and referred to as “jacks” making the national union flag the "Union Jack." Apparently, Winston Churchill, who was First Lord of the Admiralty during World War I and knew a thing or two about Royal Navy terminology, often referred to the flag as the Union Jack, helping to popularize the name. And across the pond, the U.S. Navy refers to the national flag flying on the jackstaff of a warship as the Jack of the United States.

Although there were earlier versions of a national flag, the Union Jack we see flying today has been the official flag, unchanged, since 1801. That long tenure is in contrast to the USA flag, which changed throughout the 19th and 20th centuries by adding a star for each new state that entered the union.

It’s not that everyone in Britain has been ecstatically happy with the idea of a union over the centuries; both Scotland and Ireland have rebelled against it at various points in their history.

And more recently, in September of 2014, a national referendum was held in Scotland on the question of independence. By a narrow margin (55.3% to 44.7%) the Scots voted against the proposal, deciding to remain in the union.

As for Ireland, the entire island was included in the Acts of Union, making Ireland part of the UK. But after years of political unrest, in 1922 Ireland became a self-governing dominion. The Parliament of Northern Ireland had the option to leave the Republic of Ireland and stay attached to the United Kingdom, and they voted to do so. So now only a section of the island, Northern Ireland, is part of the United Kingdom.

Matters can get really confusing on the distinction between Great Britain, the United Kingdom, and England. Some of those terms are political, while some are purely geographical. Here’s another video that may help you, as it did me, keep the terms straight:

The United Kingdom has had the same flag and much of the same union for over 200 years, even after two convulsive world wars, a host of minor wars and insurrections, and several cultural and technological revolutions.

I think that’s a pretty good record for any nation. So, let's wish the Union Jack a happy 217th birthday!

Email ThisBlogThis!Share to TwitterShare to FacebookShare to Pinterest
Labels: Film and TV, Politics and Wars