Following my recent post about the “dog days of summer”, with its focus on dogs in the Regency, I couldn’t let cats be ignored.

My tabby Zelda would never forgive me.

And, as it turns out, historically artists seem to have liked capturing a cat on canvas as much they enjoyed creating a good dog portrait.

That's not surprising. Cats were every bit as appreciated by our ancestors as dogs.

For thousands of years cats have been valued for the efficient way they control the pests that eat and/or contaminate crops. No self-respecting farmer would be caught without cats in the barn to protect the grain stored there.

When it comes to small animals, cats are like furry little hitmen, hunting and killing mice and rats with deadly precision. Plus, their feline pheromones prevent more rodents from moving in to fill the population gap. This efficiency is why there's archaeological evidence that cats were domesticated as early as 7500 BC for agricultural purposes.

But what about other uses for a cat? Did people during the Regency and beyond keep cats as pets?

Apparently, they did, and proof of the cat-human bond still exists. Just as they did with their dogs, people in centuries past paid artists to immortalize their cats in oils.

This is Henry Wriothesley, the 3rd Earl of Southampton, with a cat in the Tower of London in 1603. Southampton led a colorful life; he was a patron of the arts, a solider, a courtier, a brawler and was even briefly imprisoned for his role in the Essex Rebellion of 1601. He was also charming and celebrated for his good looks; scholars think that Southampton was the "Fair Youth" mentioned in  Shakespeare's sonnets.

Still, the haughty tuxedo cat behind him is clearly unimpressed by the handsome earl and with a penetrating glare tries to upstage Southampton in the portrait. 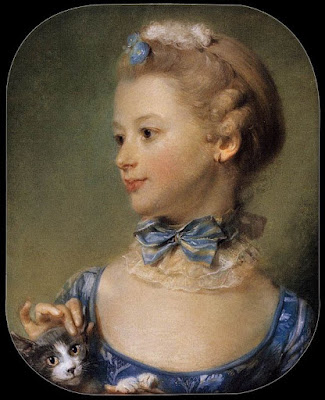 And little girls with their kittens: 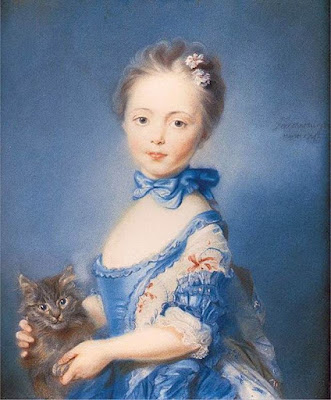 Even in the 18th century, before the advent of pet stores selling outfits for cats and dogs, people loved to dress up their cats and take a picture or in this case, an oil painting. And just like now, cats weren't thrilled about it. 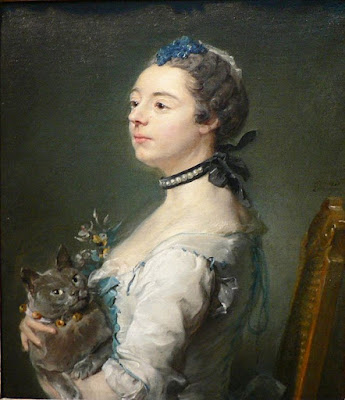 Wearing a collar with bells (oh! the inhumanity!) this disgruntled cat looks ready to rebel and jump out of its mistress's arms. 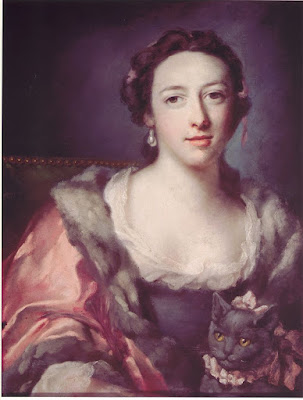 This kitty looks more resigned to wearing a fluffy bow around its neck, but if I were this cat's mistress I'd sleep with one eye open.

As for the Regency period itself, we don’t know if Jane Austen was ever tempted by the feel of soft fur or the sound of a contented purr to keep a cat as a pet. However, I like to think Jane was fond of cats; after all, they are the perfect writer's companion.
And we do have proof that Austen was not immune to feline charms. In one of her letters describing her family’s move to a residence in Bath circa 1799, she gives favorable mention to “a little black kitten [that] runs about the Staircase” of her new lodgings. 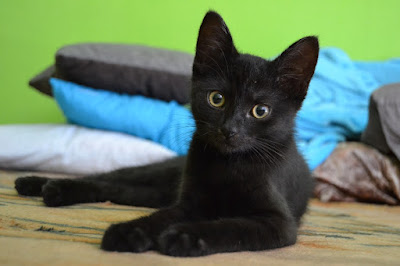 Cats during the Regency or beyond could be hard-working farm hands or a rich woman's pampered darling. Then, as now, they could be sweet, scary, affectionate, or indifferent - and all on the same day. But as any cat owner will tell you, it's extremely easy to get attached to a cat, and once that happens, there's no letting go. That was as true for the Earl of Southampton in 1603 as it is today.
As the renowned Regency poet and cat lover Percy Bysshe Shelley said:
"When my cats aren’t happy, I’m not happy. Not because I care about their mood but because I know they’re just sitting there thinking up ways to get even."
Well said, Percy!
***
Images courtesy of Pixabay and Wikimedia Commons
at August 23, 2021