"The Year Without a Summer, Part 1: Cause of a Major Regency Climate Change 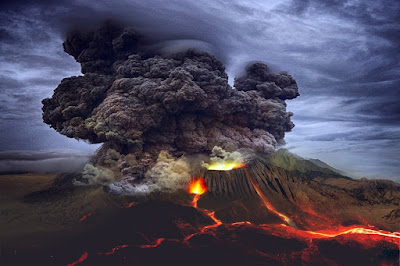 Who doesn’t love warm summer weather? Summer is the perfect time for walking barefoot in the grass, outdoor picnics and going to the beach.

And across the U.S. this summer, wildfires are raging and heat records are shattering.

Climate change, due to the “greenhouse effect” caused by burning fossil fuels, is the most likely culprit for these climate abnormalities.

But climate change can have other causes and effects. For example, one year during the Regency people suffered when the sun wouldn’t shine and temperatures plummeted. The sky was dark and the world was cold.

The Eruption of Mt. Tambora

The reason for the “year without a summer” was another climate disaster – a massive volcanic eruption. And this disaster had lasting repercussions.

Sumbawa, a small island in Indonesia (known as the Dutch East Indies during the Regency) is approximately 10,000 miles from Boston, Massachusetts, and almost 8,000 miles distant from London, England. I’d guess that most people living in the United States and the United Kingdom at that time were scarcely aware of the island's existence.

But on April 5, 1815, a volcano on Sumbawa, Mt. Tambora, erupted violently with a series of blasts. Sir Thomas Stamford Raffles, the Lt. Governor of Java, was at his post 800 miles away when he heard what he thought was a volley of cannon fire.

Sailors onboard ships at sea heard the blasts, and believed a battle was taking place. Fields composed of pumice, some as large as three miles wide, covered the South Indian Ocean like icebergs.

Then, five days later Mt. Tambora erupted again, and this time the blast was even worse. Three huge columns of fire rose in the air, coming together at the top, spewing ash, debris and molten rock while lava streamed down the mountainside.

About 12,000 people lived close to the mountain, and almost all were dead within 24 hours. Twenty miles away from the blast site, villages were covered in ash that was 40 inches thick. Hundreds of miles away, layers of dust ruined crops, killed cattle, fish and other wildlife, and poisoned water.

Famine and disease came next, causing even more destruction, until the death toll in Indonesia reached at least 90,000 people.

When Mt. Tambora blew, about three to four thousand feet blasted right off the top of the mountain. Ash and tephra (fragments of magma and other minerals) from the eruption shot into the earth’s stratosphere and were dispersed by winds around the globe, forming an almost invisible aerosol veil that scattered sunlight, effectively blocking the sun’s rays and lowering temperatures around the world.

Although the aerosol veil reflected only about one-half to one percent of the incoming energy of the sun, that percentage was enough to cool temperatures in the Northern Hemisphere by approximately 3 degrees Fahrenheit. And that 3-degree reduction was enough to change weather patterns and wreak agricultural destruction on both sides of the Atlantic Ocean.

But the effects of the Mt. Tambora eruption were not felt in Europe and North America for many months. It wasn’t until the spring and summer of 1816 that the change in climate began to become quite noticeable.

Persistent rain, flooding, frost and snowfall during the summer months in Europe and North America were some of the climate abnormalities caused by the volcanic blast.

Other effects included drought and raging forest fires, crop failures and famine. To people living in the Northern Hemisphere in 1816, the world must have seemed as though it were turned upside down.

Unaware of what was causing these climate abnormalities, some people, especially in New England, saw it as the work of witchcraft, or a punishment from God, or at the very least, signs of a coming apocalypse.

And these beliefs, along with the frightening change in climate, set off a chain of events and innovations that still affect our lives today.

Come back next week for Part 2: The long-lasting effects that “the year without a summer” had on science, literature, and the settling of the American West.

Email ThisBlogThis!Share to TwitterShare to FacebookShare to Pinterest
Labels: Science and Technology