Regency Fashion on Film: How Does Bridgerton Rate? 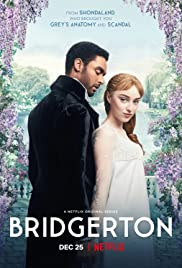 Last Christmas Bridgerton, the Netflix series based on the best-selling Regency romances of Julia Quinn, took the viewing public by storm. It’s quickly become the most popular show ever streamed on Netflix with a record-breaking 82 million households watching it. Season 2 is now in production, and the streaming service has renewed the series for Seasons 3 and 4.

Like many who love the Regency Era, I have mixed feelings about the show’s success. This is no gentle comedy of manners. The steamy sex scenes go far beyond anything Jane Austen ever wrote about in her novels. What's even more problematic, the show contains many anachronisms.

Ever since Bridgerton's debut, there's been debate about the costumes, focusing on how accurately they do or do not reflect the period.

From what I can tell, fashion historians can forgive most of the show's anachronisms, such as women going about town without proper headgear, or wearing clothes dyed in vivid colors that simply weren’t available during the early 19th century (think Penelope Featherington’s vibrant yellow gowns). 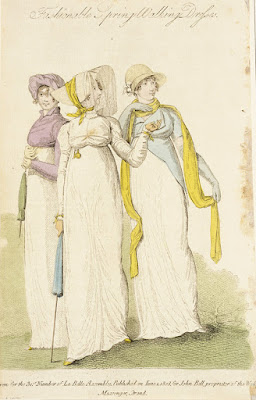 However, corsets as shown in the series are another matter.
Corsets

To begin with, Bridgerton's actors don't wear chemises under their corsets to protect their skin, like corset-wearing women in the past have always done.

But a real sticking point for many fashion historians is how these Regency women are portrayed wearing tightly laced corsets - corsets that look suspiciously Victorian.

During the this period, especially the years Bridgerton is set, fashionable women wore loosely fitted gowns, tied under the bust.

This Neoclassical style was inspired by a revival of interest in ancient Greco-Roman art, and prompted by statues depicting women wearing unstructured, draped tunics. Empress Josephine, a big fashion influencer of her time, made this style all the rage.

It's not just the appearance of corsets that seems wrong in Bridgerton. What raises the hackles of fashion historians are corsets shown being laced tightly to create small waists.

Regency gowns in 1813 didn’t show the waist, so despite what we see in the series there was no need for a tight, waist-cinching corset.

The scene where Prudence Featherington is laced to the point of pain into her corset prior to being presented at court makes no sense as soon as Prudence dons her elegant high-waisted gown.

That scene makes even less sense given the dress code women at court had to follow in 1813. Queen Charlotte required all the ladies to wear hoop skirts -- the fashion of the Queen's youth in the 18th century.

Though willing to obey the Queen's dictates, these affluent aristocratic women were also eager to wear the latest fashions.

So, they just put hoops under their empire-style gowns. The result was often an unflattering mish-mash of styles. The court gowns totally obliterated the natural waist line, making their wearers look, in my opinion, like they were in the late stages of pregnancy.

If you think I'm exaggerating, just look at the print of the Princess of Wales in 1807 wearing her court dress.

Imagine sylph-like Daphne Bridgerton or any of the Featherington sisters wearing such ridiculous gowns. No wonder the Bridgerton costume designers took liberties with history when it came to the scenes at Queen Charlotte's court.

Corsets the way we know them today weren’t even worn during the Regency. If a woman wanted or needed support or smoothing under her gown, she wore an undergarment called stays, which were a precursor to the corset.

Regency stays were longer than a corset, covering more of a woman's body. See the image in this post depicting a woman being laced into her stays by her maid circa 1810, and note the garment's long line.

In the centuries before the Regency period, stays were sometimes laced tightly to give a woman a small waist. Padding the hips with wide side hoops called panniers also made a women’s waist look comparatively tiny.

Many women, especially the younger ones, dispensed with padding or constrictive undergarments altogether in the early 19th century. Others, though, kept wearing stays to help them achieve the fashionable slendar silhouette under their columnar gowns.

With those loose gowns, tight-lacing was more or less unnecessary during most of the Regency Era. However, that doesn’t mean the practice was unheard of.

Here’s a contemporary account (1810) describing the use of stays. First, the writer observes that stays were no longer made with whalebone or hardened leather, but instead contained iron or steel bars that were 3 or 4-inches wide and 18-inches long iron.

That sounds like a torture device. But there’s more.

The writer adds that it was by “no means uncommon to see a mother lay her daughter down upon the carpet, and placing her foot on her back, break half-a-dozen laces in tightening her stays.”

What a vivid image! Perhaps poor Prudence’s corset-lacing scene in Bridgerton isn’t so far-fetched after all.

By the end of the Regency period defined waistlines were creeping back into fashion. It didn’t take long for small waists to become a fashion obsession once again and tight-lacing a concern, as this satiric cartoon, titled "A cutting wind," from the 1820s demonstrates:

Creative vision behind the series

Fashion historians have a valid point about the anachronisms on display in Bridgerton. However, the series was never meant to be a painstakingly accurate view of Regency styles and manners, so I think it’s unfair to hold its costume designers to a rigid standard.

If you want to see the Regency dress portrayed on film more accurately, look no further than the 1995 BBC adaptation of Jane Austen's Pride and Prejudice.

Bridgerton is an entertaining Regency-set fantasy, taking place in an parallel universe where racial diversity exists at the highest levels of British society. Its resounding success with the public is due to the bold and creative way producers Shonda Rimes and Betsy Beers interpreted Quinn’s novels, on several levels, for Netflix.

The genius of Rimes and Beers collaboration has been recognized in their industry. Just last April they were awarded the 2021 Distinguished Collaborator Award by the Costume Designer’s Guild.

So, you won't find period-appropriate bonnets or underwear in Bridgerton. It's the alternative world view and passionate  relationships, not historically accurate costuming, that's made the show so popular with viewers.

In fact, when it comes to proper Regency attire, some of the characters doff their clothes so often it’s hard to remember what they're wearing in some scenes.

But even Bridgerton's severest costume critics have to agree that despite any anachronisms, the series  has introduced a host of new fans to our favorite time period.

After all, never has the Regency Era been so much fun to watch!

Photos courtesy of Wikimedia Commons, the University of Washington Libraries Digital Collection, and the Los Angeles County Museum of Art (LACMA)
at May 16, 2021