As I write this, much of the world is beginning to emerge from the quarantines and restrictions caused by the COVID-19 global pandemic. And that's because for the past several months vaccines have been available and distributed widely.  As a result, COVID-19 cases and deaths are sharply declining.

But this isn’t the first vaccine success story. During the Regency era, an English scientist and physician named Edward Jenner pioneered the development of the world's first vaccine, the smallpox vaccine.

This three-part series tells Jenner's story, which is still inspiring and relevant today.

The Scourge of Smallpox

Jenner's tale begins with the disease itself. It's impossible to overestimate the horrors of smallpox. For over a millennium it was rightly feared for the way it killed, disabled and disfigured people on a massive scale.

No one knows exactly when smallpox first appeared to plague mankind, but there's evidence it was around as early as 10,000 B.C., in African agricultural settlements.
It wasn't long before the disease showed up in Egypt, India and China. Throughout the Middle Ages there were intermittent, and devastating, smallpox epidemics.

By 18th century Europe, smallpox killed about 400,000 people every year, and blinded one-third of its survivors. The number of infected people who died from smallpox (case fatality rate) ranged from 20 to 60 percent.

The disease was especially brutal to children. According to data collected in Glasgow, a city famed for its careful record-keeping, from about 1783 to 1800 approximately half of all children who were born died before they reached the age of 10, and smallpox was responsible for 40 percent of those deaths.

Other statistics show that during the same time period the mortality rate among infants who contracted smallpox was nearly 80 percent in London and 98 percent in Berlin.

The disease did other damage, too. Survivors were usually left with disfiguring facial scars. Plus, before the vaccination era, smallpox was the chief cause of blindness throughout Europe.

Also by the 18th century it was common knowledge that if you could survive smallpox you’d be immune to it. In fact, we know that as early as 436 B.C. smallpox survivors were the ones who took care of those suffering from the disease.

Armed with this knowledge, some people decided to tackle smallpox head-on by deliberately exposing themselves to it. They developed a process called variolation, from the Latin word variola that was used at the time for smallpox.

Variolation was done by piercing the skin of an arm or leg, usually with a sharp lancet dripping with fluid from an active smallpox blister. Another method involved rubbing a piece of fluid-soaked cloth over a scratch on the skin.

This practice was used widely in Asia and the Middle East, and while it sounded barbaric to Western ears it often worked – the rate and the severity of smallpox infections dropped significantly when variolation was performed.

Variolation came to England in the early 18th century. It happened soon after Lady Mary Wortley Montagu, wife of the British Ambassador to the Ottoman Empire, saw the procedure performed in Istanbul.

If anyone had a reason to hate smallpox, it was Lady Mary. Not only had her brother died from it, but a bout with smallpox in 1715 left her, once a celebrated beauty, with a badly scarred face.

While living In Turkey, Lady Mary had her 5-year-old son variolated by embassy surgeon Charles Maitland. But when she got back home, she discovered English doctors opposed this foreign practice.

That didn’t stop her. When a smallpox epidemic loomed in 1721, she insisted her 4-year-old daughter be variolated. Once again Dr. Maitland performed the procedure, but this time Lady Mary made sure royal physicians saw him do it. When Maitland also successfully variolated two daughters of the Princess of Wales in 1722, variolation became acceptable in English society.

But variolation had its downsides. The biggest drawback was the risk of the procedure going spectacularly wrong. If that happened, variolation could give someone smallpox or make them a carrier of the disease.

The concept of inoculating someone against smallpox by introducing a small amount of it into their bodies seemed to work. But how could this procedure be made not only be safer, but easier to administer to lots of people?

The answer to that question is in my next post, The Genius of Jenner, Part 2 of Edward Jenner and the First Vaccine

Sources for this post include:
"Edward Jenner and the history of smallpox and vaccination," by Stefan Riedel, MD, PhD, National Center for Biotechnology Information, U.S. National Library of Medicine, January 2005
Images courtesy of Wikimedia Commons
at May 25, 2021

Jenner's Legacy: Part 3 of Edward Jenner and the First Vaccine

Jenner advising a farmer to vaccinate his family Jenner’s development of a vaccine in the 1790s was only the beginning, not the end of the s... 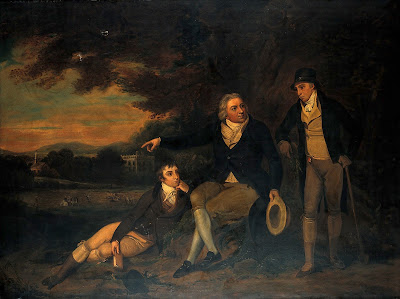