Next week here in the States we’ll be celebrating Thanksgiving, a holiday I’ve always considered to be uniquely American, like the Fourth of July.

But apparently I was wrong. Because next Thursday some British citizens will be sitting down to a meal much like the one their Americans cousins will be enjoying, only they’ll call it ”Brits-giving.”

According to The Independent, a British online newspaper, Thanksgiving is now being adopted by the Brits – 1 in 6 British citizens, this news source reports, now celebrate this holiday.

It's kind of ironic if you think about it, since Thanksgiving commemorates the departure from the British Isles of a bunch of British subjects in 1620. One of the first group of immigrants to America, the pilgrims who boarded the Mayflower were willing to undertake a perilous sea voyage just to escape religious persecution in England.

For the Brits to celebrate this exodus is almost as odd as if people in the UK decided to start celebrating our Independence Day with traditional parades, barbecues and fireworks.

But who doesn’t love a good meal with family and friends? And isn’t it a good idea for all of us to take the opportunity once a year to formally express our gratitude for the good things in our lives? 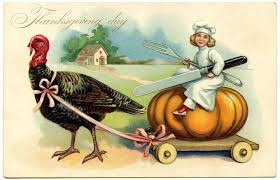 So, if this November finds you in London and you're looking for a restaurant that serves an old-fashioned American Thanksgiving meal, with roast turkey, cranberry sauce and pumpkin pie, take heart -  Visit London has got you covered.

And if you’re British and you’ve never struggled to stuff and roast a 20-lb turkey, and especially if you’re not sure what to serve with your bird, The Spruce will help you out with a British Thanksgiving dinner menu.
No matter where you celebrate your Thanksgiving holiday this year, here’s a lovely song by Mary Chapin Carpenter, with music and images that are sure to get you in the mood:

So Happy Thanksgiving, or Brits-giving, or whatever you celebrate. (Canadians, I know you already had your Thanksgiving celebration last month.) When I consider what I'm thankful for this year, my blog readers will be at the top of the list! 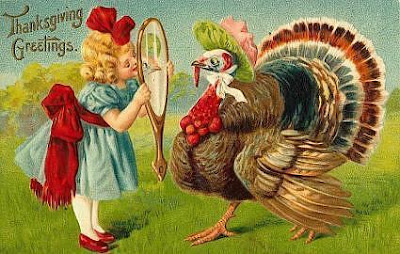 Images from Wikimedia Commons
at November 17, 2017