On this day, November 10, in 1871, ace reporter Henry Morton Stanley made it to the shores of Lake Tanganyika in Africa and finally found the quarry his editor at New York Herald newspaper had sent him in search of nearly a year earlier: Dr. David Livingstone.

The famous "medical missionary" and intrepid explorer had been missing from the public eye since 1864 when he'd started off on an expedition into Central Africa to search for the source of the Nile River. Curiosity around the world as to the fate of the Dr. Livingstone had reached a fever pitch, prompting the editor's decision to send Stanley, an explorer in his own right, to the sub-continent.

According to Stanley's own account (which may have been altered for better effect after the event), the reporter ended his quest with this greeting: "Dr. Livingstone, I presume?”

Born in Scotland during the Regency on March 19, 1813, Livingstone trained as both a medical doctor and a Scottish Christian Congregationalist minister. As a missionary, he became a Victorian hero known as much for his African explorations as for his attempts to convert the natives to Christianity.

He only ever converted one native African to the Christian religion, and that conversion didn’t last. Neither did he achieve his life’s goal of finding the source of the Nile River. But he accomplished other things before he died of malaria and dysentery in 1873 in what is now Zambia.

Here are a few facts about Livingstone, his family, and, of course, Stanley:

·       Livingstone was an ardent foe of the African slave trade and worked to end it.

·        Explorer of the African interior, Livingstone mapped most of the Zambezi River and is credited with paving the way for British colonial rule in Africa.

·        He was the first European to view the magnificent waterfall in central Africa, naming it Victoria Falls to honor his queen.

·        His wife Mary was the daughter of a famous Scottish missionary, Robert Moffat. Mary bore her husband six children and accompanied him on his expeditions until she died of malaria in 1862 in Mozambique.

·        The explorer’s eldest son Robert found his way to America during the Civil War and went into the Union Army, under a false name and with a few years added to his age. Most likely Robert was either paid or coerced into the army, or pressed into service while homeless and living nearly destitute at the Sailor’s Home in Boston. (It was a common practice during the Civil War for wealthy men to get substitutes, sometimes by shady means, to go into the army for them.) In any case, Livingstone’s son was wounded in action and died in a North Carolina Confederate prisoner of war camp at age 18 in 1864.

·         A native of Wales, Stanley also went to America and fought in the Civil War, volunteering for the Confederate 6th Arkansas Regiment, where he fought at the Battle of Shiloh. After capture and imprisonment, Stanley changed sides and fought for the Union with the 1st Illinois Artillery. After the war, he became a journalist and in 1885 a U.S. citizen. But by the end of the century, he'd returned to England, reverted to being a British citizen, was knighted by Queen Victoria and elected to Parliament, all before his death in 1904.

·         The prestigious and exclusive Royal Geographical Society of London awarded Livingstone a gold medal and made him a made a Fellow of the Society.

·         After his death, Livingstone’s remains were laboriously hauled across Africa and sent by sea back to England, where they were interred in Westminster Abbey.

Livingstone is honored with memorials around the world. There are plaques, statues, schools, streets and towns bearing his name in Africa, Scotland, London, Canada, New Zealand, the United States and even in Antarctica.

In 2002, a BBC nationwide television poll revealed that Livingstone is regarded as one of the hundred most influential people in British history, despite the fact that he's been dead almost 150 years.
In the 20th century, Livingstone’s life inspired two very different popular movies. One is a serious flick made in 1939, Stanley and Livingstone with Spencer Tracy acting as Stanley: 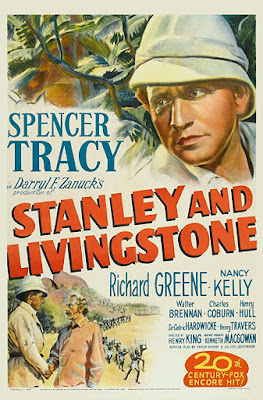 The other is a slapstick comedy with Abbot and Costello, 1949’s Africa Screams: 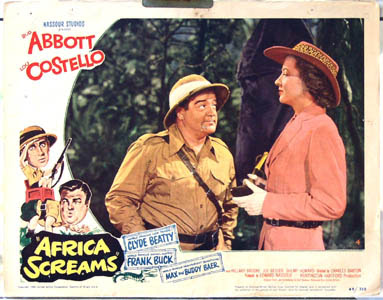 And Livingstone’s famous encounter with Stanley was referenced in a bouncy song by ABBA in 1974 ("What About Livingstone?") and also in a song by The Moody Blues ("Dr. Livingstone, I Presume") in 1968.

Here's a clip of "Dr. Livingstone, I Presume":


The songs, the movies, and the books that have been written about the missionary doctor and the reporter who went in search of him are all proof that Stanley and Livingstone's encounter, whether or not the famous words were actually uttered, has a firm place not just in history but also in the popular imagination.

Images by IMDB and Wikimedia Commons

Email ThisBlogThis!Share to TwitterShare to FacebookShare to Pinterest
Labels: Art and Culture, Film and TV, Personalities