There’s no doubt about it. In the fickle world of fashion, the female derrière is having a moment. If, like many women, you've spent most of your adult life dieting and exercising to trim your backside, there’s no easy way to tell you this: you may be out of style.

Fashion can be oddly specific when it comes to the female form. Every couple of years or so a trend will focus on one specific feminine attribute. For example, in the 1960s, miniskirts made legs fashionable.

And who can forget the way shoulders muscled control of the ’80’s fashion scene? If you were an adult woman during that decade, chances are you had at least one blouse or jacket with enough padding to make a linebacker envious.

In the decades that've followed, crop tops and low-rise jeans have bared the midriff and put the spotlight on the female stomach. Now popular culture and Kim Kardashian have helped fashion shift focus once more.


According to The Tab (a news site for students based in the UK, originating from the University of Cambridge) celebrities like Nicki Minaj and Jennifer Lopez have made “bums” a woman’s best asset, and “booty shorts” this summer’s hottest fashion trend for young women.

But this is a history blog, and I feel obliged to point out that the current obsession with the female bottom is not new. In fashion every trend cycles around and around, and this particular trend is no exception. Though they didn’t wear booty shorts, women during the Regency era did wear bustles under their skirts to exaggerate the view from behind.

The Regency bustle was a smallish pad tied around the waist, to give a lift to the back of the skirts on those empire-style dresses. The cut of a Regency gown generally put a greater focus on a woman’s bosom and yes, her shoulders, too, by exposing the neck and a lot of the shoulder. Showing off a fine décolletage (or cleavage) was all the rage and those high-waisted gowns often displayed a generous expanse of bosom.

Then, for reasons I find hard to fathom, styles in the decades following the Regency took the old-fashioned panniers or side-hoops of the 18th century and redesigned them to encircle the waist and pump up the volume of a woman’s skirts. This style reached its apogee in the crinoline or hoop skirt of the mid-19th century (epitomized in my mind by Vivien Leigh's portrayal of Scarlet O’Hara in Gone with the Wind).

A steel cage-like apparatus worn under a woman’s gown, the crinoline eliminated the need for layers of petticoats to produce the desired bell-like shape. At the height of its fashion, the crinoline mushroomed to six feet in diameter. Imagine trying to fit a skirt of that magnitude through a doorway, or in a carriage! 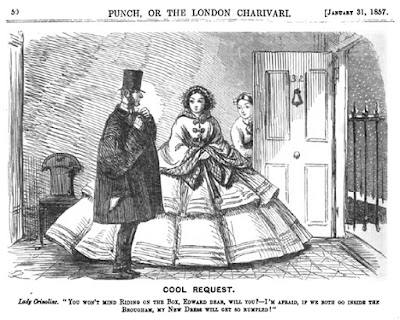 The female fashion silhouette changed again by the 1880s, when a gown’s skirt front flattened and a bustle created by something much bigger than the Regency bustle pad protruded in the back. And it wasn’t just the bustle that emphasized a woman’s buttocks in these frocks; a tightly-laced corset did a nice job of that, too.

But lest you think bustles are a thing of the past, be assured that you can buy the equivalent of a bustle today, for that trendy full-bottomed look. Padded underwear, “butt-lifting” jeans, Spanx with a built-in “boost ” – these items, readily available to today’s woman, weren’t an option for the fashionable woman of yesteryear. 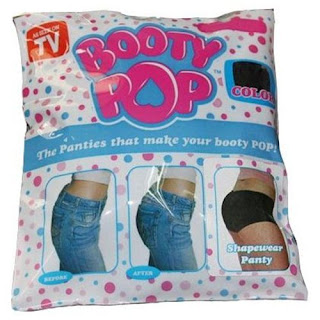 You can even buy “butt enhancement” creams or ingest pills that promise to give you a full rear curve. And of course, there’s the permanent solution – “surgical enhancement,” implants that cost about $10,000 to install in your backside.

Eventually, the bodacious booty will again fade from the fashion scene, and another trend will take its place. Who knows, perhaps (heaven help us) some form of the crinoline may come back. Cycle-wise, it’s about time.

See how these young Victorian ladies laugh at their mother’s (or more likely, their grandmother’s) Regency style: 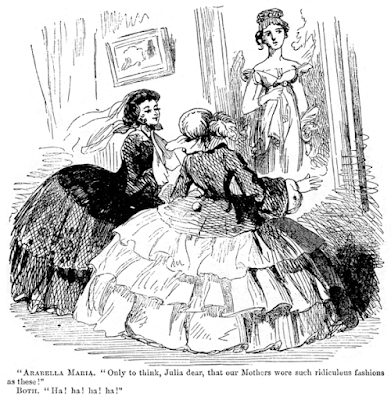 Young people making fun of the previous generation? Some things never change!
Images courtesy of Wikimedia Commons, except where otherwise noted
at September 04, 2015

Email ThisBlogThis!Share to TwitterShare to FacebookShare to Pinterest
Labels: Fashions