Have you ever enthusiastically embarked on something, only to realize later it wasn’t such a good idea? I know I have, which is why I’m thinking about Napoleon Bonaparte.

This March marks the two-hundred-year anniversary of Napoleon’s ill-fated attempt to reclaim his empire after being exiled to Elba. He escaped Elba and sailed to France, landing on the French coast on March 20, 2015. His next move was to head for the capital city, gathering troops still loyal to him on his way.

Though initially it looked like Napoleon might succeed (they loved him in Paris), it didn’t work out so well for him. About 100 days after his triumphant return he literally met his Waterloo and was defeated in the battle of the same name in Belgium. As a punishment for his presumption (and breaking the terms of his first exile) he was once again sent into exile - this time to St. Helena, a barren rock off the coast of Africa. Napoleon's captors wanted to make sure the former Emperor was re-exiled as far as possible from Europe, to discourage any further escape attempts.

As exile spots go, St. Helena might sound more posh than Elba. But in reality Elba, in a Tuscan archipelago off the coast of Italy, was a Mediterranean resort compared to the volcanic island of St. Helena. It was on St. Helena that Napoleon died at age 51 in 1821, most likely of stomach cancer.

One way to commemorate the anniversary of Napoleon's return to France in 1815 is to indulge in a sweet pastry treat called a “napoleon.” It’s a dessert with a long history, and most likely not originally named for the Emperor. That association may have come later, and the pastry may actually owe its name to the Italian city of Naples. But who cares? It’s delicious. And a few bites just might encourage you to get your hopes up and believe, like Napoleon did, that you can accomplish anything.
You can buy a napoleon at a good French bakery. Or you can try to make one of your own, from a recipe like this one on Spruce Eats. 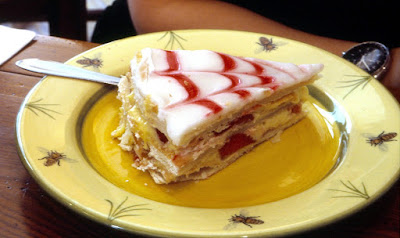 All the images in this post are courtesy of Wikimedia Commons