Who Ya Gonna Call? Regency Hauntings

Halloween means ghost tales, and everyone loves a good ghost story. Folks who lived during the Regency were no exception. Here are some famous ghosts of people who lived in the centuries just before the Regency. Accounts of their supernatural activities would have chilled the blood in the veins of people living in the early 19th century.
Nell Gwyn
Nell Gwyn would have been a familiar name during the Regency, even though she lived during the 17th century. She was the very “pretty and witty” (as the diarist Samuel Pepys described her) mistress of the Merry Monarch, King Charles II. In those times, in which the English were bitterly divided by religion, she is said to have quieted an unruly mob by declaring “Good people, you are mistaken. I am the Protestant whore.” (She was referring to one of King Charles’s other mistresses, the Catholic Duchess of Portsmouth.)

Nell is reputed to haunt Salisbury Hall. For more about Nell and her afterlife activities you can view this 13-minute YouTube clip of an NBC special from the 1960s. In it, plummy-voiced actress and occult enthusiast Margaret Rutherford discusses Nell's haunting of Salisbury Hall, and she also describes ghosts at two other English manors.
Henry VII and his wives
Hampton Court Palace, the 16th century home of Henry VIII, would also have been recognized by people living during the Regency, and they would have known about its ghosts, too. According to legend, Henry himself is still in residence there (in ghostly form, of course) as are two of his ill-fated wives, Jane Seymour and Catherine Howard.
The Brown Lady of Raynham Hall
Another well-known ghost of that era would have been the Brown Lady of Raynham Hall in Norfolk. This was supposed to be the ghost of Lady Dorothy Walpole, whom some say was trapped at Raynham Hall by the jealous wife of her lover, Lord Wharton. The Countess of Wharton reputedly tricked Lady Dorothy into visiting her home and then forced her to stay there until Lady Dorothy eventually died of smallpox in 1726. Documented sightings of the “Brown Lady” go back as far as 1835, and a photo was taken of her apparition in 1936. Not too surprisingly, this photo was later proved to be a fake.

Ghosts of Downton Abbey
Just as entertaining as the real-life ghost stories associated with England’s stately homes are the fictional tales. Take Downton Abbey, for example. Over the past four seasons of this popular TV series many characters have died in or near the house. (I’m thinking of you, Matthew Crawley and your ridiculous auto accident in a lane near the estate.)
Potential Abbey ghosts include:
With all those candidates, how could Downton Abbey not be haunted? Too bad the Crawleys couldn't just call the Ghostbusters! 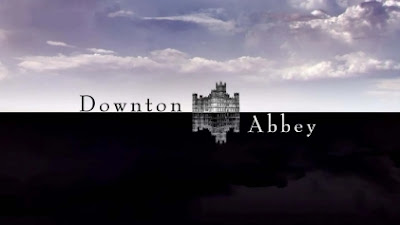 All images courtesy of Wikimedia Commons
at October 31, 2014

Email ThisBlogThis!Share to TwitterShare to FacebookShare to Pinterest
Labels: Art and Culture, Film and TV