Bad Romance – Caroline of Brunswick and the Prince Regent

British royal scandals are nothing new, and historically the month of August has seen its share of scandalous events among the nobility.

You may remember the summer of 1997 when the Princess Diana, recently divorced from Charles, the Prince of Wales, made headlines by dating Dodi Fayed, the son of an Egyptian billionaire. That summer the couple was photographed on Fayed’s yacht in the Mediterranean, a holiday that the tabloid press feasted on by publishing as many photos as they could obtain. But a month later on August 31 the couple’s summer idyll was cut short when their car, dogged by motorcycle-mounted paparazzi, crashed in a tunnel under the city of Paris. Both Dodi and Diana were killed.

Two hundred years ago this month another princess also made news when she left England and a loveless marriage to travel abroad.

In August of 1814 Princess Caroline left England and her husband, the Prince Regent, for a self-imposed exile on the Continent. After a visit to her native Brunswick, she moved to Italy. Apparently she went a little wild, and word of her behavior soon reached London.

One scandal in particular was her liaison with a handsome Italian hunk who many years her junior. He was a servant she hired in Milan, and his name was Bartolomeo Bergami. He later changed his surname to Pergami because it sounded more aristocratic.

According to gossip, Caroline spent much of her time cavorting with Pergami and dressing and acting in ways inappropriate to her age, much less her station in life. But perhaps she deserved a little fun after years of being stuck in England with a husband who made no secret of his disgust of her.

Caroline had come to England at age 26 in November of 1794 to marry the Prince Regent. It was the first time either of them had met. Theirs was far from a love match; the Prince only consented to wed his German cousin under pressure from Parliament. The deal was that the British government would pay the Prince’s staggering debts if Prinny would quit fooling around with older, married women and make a suitable match.

Prinny took an instant dislike to his bride, but went through with the wedding in April of 1795. The feeling soon became mutual, and the couple separated after a royal heir was produced. Their daughter, the Princess Charlotte, was born in January of 1796 - a scant nine months after their wedding night.

Caroline took her marital separation to heart, and London society was soon scandalized by rumors of her infidelity. Prinny, on the other hand, continued his old life and returned to his mistresses without incurring the same social censure.

Because of Prinny's aversion to her, Caroline found herself increasingly isolated in England. Her husband even denied her access to her daughter.

After Caroline left the country in 1814 she stayed in Europe for six years. During this time her daughter married a German prince, and the happy couple soon became pregnant. In 1817, with Caroline still abroad, tragedy struck when Charlotte died giving birth to a stillborn son. Caroline heard the news of her daughter's death from a passing courier, showing how far she had been cast out of the royal circle.

Caroline didn't return to England until 1820 when mad King George III died and Prinny acceded to the throne. Upon the old monarch's death Prinny became King of the United Kingdom, and it followed that his estranged wife was now his Queen. Caroline wanted to participate in the coronation service and be crowned next to her husband. Prinny was determined not to allow that. Now more than ever he wanted to divorce his wife.

A bill was introduced in Parliament to strip the new Queen of her titles and terminate her marriage to the soon-to-be-crowned King of England. Caroline fought to uphold her claims. In the end, the bill was withdrawn, largely because the Queen was very popular with the English public while her husband was not. 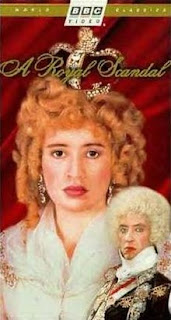 But Caroline lost anyway. When Prinny was crowned amid much pomp and circumstance at Westminster Abbey on July 19, 1821, she was turned away at the door. She died a few weeks later on the 7th of August. Some say the cause of her death was an obstruction in her abdomen and the medication she took for it, while others believed it was a broken heart that killed her.

It’s a coincidence that these two princesses - Diana and Caroline - both had unhappy marriages to a Prince of Wales and both died unexpectedly in the same month of the year. Another August, another inglorious end to a bad romance. Or maybe August is just an unlucky month for some royal princesses.

For more details about Caroline, you might enjoy the 1996 BBC docudrama about the Prince Regent's disastrous marriage titled A Royal Scandal, starring Richard E. Grant and Susan Lynch, and narrated by Ian Richardson. In the States it occasionally shows up on PBS. It's also currently available on the streaming service BritBox.
As Leo Tolstoy said in his novel Anna Karenina, "All happy families are alike; each unhappy family is unhappy in its own way."
And that's a pretty good way to describe these two royal marriages.

All images courtesy of Wikimedia Commons
at August 15, 2014