The long-anticipated fourth season of the hit BBC series Downton Abbey premiered last week in the U.S., and the first episode revolved around Lady Mary’s grief at losing her husband Matthew (who inconveniently crashed his car on the same day his son was born at the end of Season 3). 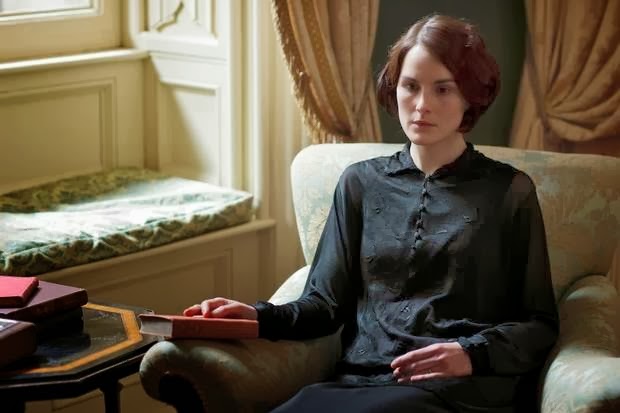 We were told at the outset of the episode that six months had passed since Matthew’s death, and it was hard not to notice the unrelenting black of the clothes Mary wore. She was dressed according to the dictates of mourning etiquette, a practice which extended back to the Regency period and even further.

During the Regency era a woman whose husband had died would wear black for at least a year. Her gowns would typically be made of black bombazine, a heavy material, or a lighter black silk crepe. If you were an aristocrat like Lady Mary, your mourning clothes would be made by a fashionable modiste, based on the latest French fashion plates.

Women who could not afford to have mourning gowns specially made for them would get creative and make a mourning wardrobe from the clothes they already had, adding black trim to a gown or a black lining to a piece of outer wear like a pelisse or cloak.

They would sometimes even dye an old dress black. I'm sure Lady Mary did not have to make such economies!


Jewelry during mourning was similarly restrained. Suitable jewelry included pieces made of jet, dark amber or black glass or enamel. Frills such as buckles and bows were definitely out. During mourning a woman would limit her social engagements or skip them altogether.

There were specific degrees of mourning depending on the closeness of the relation being mourned. Full black mourning would be worn for a husband or wife for a period of a year and a day. Six months was enough time for a parent or parent-in-law. Required periods of mourning decreased from there, such as three months for a brother or sister, uncle or aunt, down to a week for a first or second cousin.

After the initial period of mourning a woman could go into half-mourning, wearing black lightened by white details or accessories. Other appropriate colors for half-mourning included subdued shades of gray and purple, along with lilac and lavender. These lighter colors were supposed to help a woman transition back to bright colors and full participation in society and life.

As Season 4 continues we see Mary transition from black to lilac and lavender, colors that anyone during the Regency would have recognized as a sign that Mary was beginning to emerge from her deep mourning and obsession with Matthew’s death to rejoin the world of the living.
***
Images courtesy of Wikimedia Commons

Email ThisBlogThis!Share to TwitterShare to FacebookShare to Pinterest
Labels: Art and Culture, Fashions