January 25 is a day of celebration for Scottish people around the world. Robbie Burns Day, as it's affectionately known, marks the birthday of 18th century poet and lyricist Robert Burns, born 263 years ago in Ayrshire, Scotland.

An early pioneer of the Romantic movement, Burns is famous for writing poetry that inspired other Romantic poets after him, including Regency poets such as William Wordsworth, Percy Bysshe Shelley and Samuel Taylor Coleridge.

The Scottish poet was a well-known and beloved figure during the Regency. In fact, his friends started gathering to commemorate his birthday a mere six years after his death in 1796.

So, you have to wonder what another prominent Regency figure, Jane Austen, thought about her fellow writer. We know she was aware of him and his work.

In one of her novels, she mentions him by name and indicates she appreciated his poetic skills. However, if we read further, it seems as though Austen's general opinion of Burns is based on her understanding of his moral character.

But before getting into that, let's take a closer look at Burns' life and legacy.

Burns was born in 1759 to a tenant farmer, the eldest of seven children. Burns spent his youth doing hard physical labor, which affected his health throughout his life.

He himself became a tenant farmer in Ayrshire. But as a young teen he began to write romantic poetry, possibly inspired by a girl who was his first love.

While working primarily as a farm laborer, Burns received a rather haphazard education, initially by his father who taught him the basic reading and writing at home, and later in schools under the tutelage of John Murdoch, who instructed him in Latin, French, grammar and mathematics.

But in the 1786 Burns life began to change after he submitted some of his work for publication.  Poems, Chiefly in the Scottish dialect was an immediate hit, and soon he was famous throughout his homeland. He'd originally intended to use the money from the publication to buy passage to Jamaica, but his success encouraged him to stay in Scotland and keep writing. At the time of his death ten years later in 1796, he was still writing and working as an excise officer at Dumfries.

Burns was a romantic through and through, and is credited with being a pioneer of Romanticism, an artistic, literary and intellectual movement that blossomed during the 19th century. Burn's poetry is lush and sentimental (“My luve is like a red red rose/That's newly sprung in June”), spontaneous and sincere. And he was apparently just as romantic and ardent in his personal life.

He married Jean Armour in 1788 after she had already become pregnant with his twins a few years earlier. As his wife, she went on to bear him seven more children. Burns also had several love affairs, bringing the total number of children he fathered to 12. Only five of these twelve survived to adulthood, but they have reportedly produced 900 descendants.

In addition, to his writing, Burns was interested in Scottish folklore, and he collected and preserved Scottish folk songs, sometimes revising them in the process. One example is the New Year's favorite, "Auld Lang Syne." In addition to romantic themes, Burn's poetry also expressed themes of egalitarianism and other republican ideals. His poem "A Man's a Man for A' That," was especially popular.

Today Robert Burns is one of the most celebrated poets in the world. He's become a symbol of a national pride that unites Scots who've emigrated to countries far from their homeland.

The influence of Burns on art and literature is widespread, acknowledged by writers like J.D. Salinger and John Steinbeck (his book Of Mice and Men takes its title from a line written by Burns) and musicians like Bob Dylan, who said that Burn's composition "To A Red, Red Rose" was one of his greatest inspirations.

There are Burns' clubs all over the world, and over 60 memorials and monuments to honor him have been built across the United Kingdom, including Canada, Ireland, Australia and New Zealand, the United States, and even in Estonia.

A replica of the cottage he was born in was constructed in Atlanta, Georgia. A crater on the Mercury was named after Burns.

Though the UK has issued several commemorative postage stamps honoring Burns over the years, the former USSR was the first country to do so. In 1959 the Soviet Union created a stamp to mark the 200th anniversary of the poet's birth.

Burns was admired in Russia in the early 19th century for his writings supporting the working classes. Following the Russian revolution, Burns was even known as the people's poet of Russia, where he is still popular.

And as late as 2009, Robert Burns (aka the National Bard and the Ploughman Poet) was voted the “Greatest Scot of All Time” (he even got more votes than William Wallace!) in a poll taken by a Scottish television channel.

Though the two writers never met, the lives of Jane Austen and Robert Burns did overlap chronologically. When Jane Austen was born in December 1775 at the Steventon Rectory in Hampshire, England, Burns was already a robust lad of 16, working hard, falling in love and putting his feelings in eloquent verse.

And when Burns died prematurely at the age of only 37 on July 21 in 1796, Jane was 21 years old, working on what would become her best known novel, Pride and Prejudice. having recently enjoyed an exhilarating flirtation that would unfortunately go nowhere with Tom Lefroy.

Unlike Burns, who was married and had several love affairs both before and during his marriage, Jane remained resolutely single and close to her sister Cassandra until the end of her life.

Though Austen was never proclaimed a national hero, her legacy is solid. Not as successful as Burns during her lifetime, Austen nevertheless achieved great literary renown in the centuries that followed.

Since her death Austen's six novels have rarely been out of print. She has fans and festivals worldwide. Her novels and other writings have been the subject of countless scholarly studies and inspired equally countless literary spin-offs, popular fiction and cinematic adaptations. And in 2017 she replaced Charles Darwin as the face on England's ten-pound note. 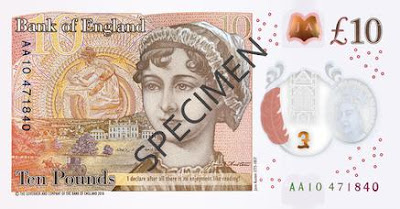 In contrast to Burn's romanticism, Austen's literary work is known for its realism, sharp wit, and irony. Unlike him she never married (though she came close once) and the basis for the marriages in her stories were often more pragmatic than romantic.

So, what did Jane, a contemporary of Burns, think of him? We get a clue from a comment by one of her fictional characters.

In Austen's unfinished novel Sanditon,  Charlotte Heywood, a single woman in her early 20s, says this:

“I have read several of Burns’ Poems with great delight”, said Charlotte, as soon as she had time to speak, “but I am not poetic enough to separate a Man’s Poetry entirely from his Character; — & poor Burns’s known Irregularities greatly interrupt my enjoyment of his Lines. — I have difficulty in depending on the Truth of his Feelings as a Lover. I have not faith in the sincerity of the affections of a Man of his Description. He felt & he wrote & he forgot.”

But Jane Austen's criticism cannot dent the ardor of the admiration accorded to Robert Burns. Burns' birthday has become an unofficial holiday in Scotland. And for many, the best way to observe the occasion is by attending a Burns Night supper.

The first supper to commemorate Burns on his birthday was held on January 25, 1803. (Although a few of Burn's friends gathered the year before to honor him on January 29, thinking that was the date of his birth, they corrected their mistake the following year.)

Burns Night suppers have been held on January 25 ever since. Traditionally, Scottish dishes such as cock-a-leekie soup, haggis, neeps and tatties are served, often with a whiskey sauce.

To those unfamiliar with Scottish cuisine, "cock-a-leekie" soup is made with chicken and leeks, "neeps" are mashed turnips, "tatties" are mashed potatoes, and haggis, a dish only a true Scot could love, is made out of the heart, liver and lungs of a sheep, mixed with oatmeal and spices, and cooked in the sheep's stomach (although nowadays the stomach may be replaced by an artificial sausage casing).

Modern Burns Night suppers in Scotland are enlivened with events such as poetry readings (Burns poetry, of course) along with singing and dancing. Whiskey and the wearing of tartans are other popular features of Burns Night celebrations.

But perhaps the most unusual and festive Burn’s night celebration takes place in Canada, where the traditional Burns night supper has become a rollicking event known as Gung Haggis Fat Choy.

The origins of this event go back almost 30 years, when Todd Wong, a student at Simon Fraser University in Burnaby, British Columbia, saw that the 1993 Chinese Lunar New Year would be celebrated that year just a couple of days after Robert Burns’ birthday. Wong, who is Scottish and Chinese, decided to combine the two events to honor his own multicultural heritage.

Thus, his “Toddish McWong” persona was born. Wong hosted his first Gung Haggis Fat Choy dinner in 1998 as a private party for 16 friends. The event is now a public event involving hundreds of people, drawn into a joyous celebration that combines Scottish and Chinese music, Burns’ poetry, singalongs. and live performances.

The festivities culminate in a banquet featuring haggis and turnips, of course, along with Chinese dishes like Mongolian beef and spicy jelly fish.

This year’s Gung Haggis Fat Choy celebration is on January 30 in Vancouver, B.C.’s Chinatown. Because of pandemic restrictions, instead of attending a banquet, participants can purchase a box dinner and watch a Livestream event at home.

Here’s a clip of a past celebration:

Bagpipes and dragons – a creative fusion I think an artist like Burns would appreciate And I'm pretty sure Jane Austen, who often wrote about the excitement of attending balls, would have appreciated the dancing at all types of Burns Nights.

So, on behalf of Robbie Burns, admirers of poetry, song, and Scotland, and Toddish McWong, Happy Burns Night, and Gung Haggis Fat Choy!

"Burness Genealogy and Family History," compiled by John Burness and updated on January 6, 2022