Charles Dickens, the Man Behind our Modern Christmas Celebrations

I'm always impressed by how one book can make a tremendous impact on the world, extending far beyond the writer’s lifetime. This certainly happened to Charles Dickens, born just a year after George, Prince of Wales was appointed Prince Regent. Dickens' book, A Christmas Carol, not only affected the way Victorians celebrated Christmas but is still a major influence on the Christmas values and traditions we cherish today.

If we could travel back in time a couple of hundred years, we'd see that Christmas prior to the Victorian era bore little resemblance to our modern Christmas celebrations.

In medieval times Christmas celebrations were the highlight of the year, with feasting, pantomimes, dancing, singing, games, gifts, and other fun. But the Puritans of the 16th and 17th centuries frowned on celebrations in general, and forbade any frivolity at Christmas.

This Puritan influence lingered, and during the 18th century and the Regency era, Christmas was low-key. Games, gifts and raucous merry-making were out.  A toned-down observance of the holiday centering on a religious service was in.

In Pride and Prejudice Jane Austen mentions Christmas exactly six times, and the references are brief. For example, Darcy says his sister will stay at Pemberley till Christmas, and Mrs. Bennet’s brother and sister-in-law are mentioned as having come as usual to spend “the Christmas at Longbourn.”

That's not to say that Christmas wasn't observed at all. Regency homes were often decorated with greenery such as holly or laurel. People went to church on Christmas Day, and then home to a dinner that included plum pudding and mince pie. Lucky servants or tradesmen might get "Christmas Boxes" - small gifts of money - but it wasn't the custom to lavish gifts  on family and friends the way we often do today.

And there's evidence of at least some festivities linked to Christmas season during the Regency. We know this because of a letter Caroline Bingley, sister of the eligible bachelor Mr. Bingley, sends Jane Bennet in Pride and Prejudice.

Caroline, hoping to convince Jane that her brother was no longer interested in her, writes:

“I sincerely hope your Christmas in Hertfordshire may abound in the gaieties which that season generally brings, and that your beaux will be so numerous as to prevent your feeling the loss of the three of whom we shall deprive you.”

"Gaieties" sounds nice, even if the intent of Caroline's letter was mean.

Christmas observances in England started to change when Queen Victoria married Prince Albert, and Albert introduced the German custom of having a decorated Christmas tree to his family in the late 1840s. This royal example inspired English families to get their own Christmas trees.

But Christmas really started to evolve into the merry holiday we're familiar with after A Christmas Carol was published in 1843 and became a smash hit with the British public.

On February 7, 1812, while Jane Austen was writing her famous novels and living in Chawton House in Hampshire, Charles Dickens was born in Portsmouth, England.
His childhood was marred by his family's financial instability. When Dickens was only 12, his father was thrown into debtor's prison. Young Charles had to leave school and work in a factory for three years. He was able to return to school, and later began his literary career as a journalist, editing a weekly publication for 20 years while writing his stories.

Throughout his life, Dickens authored 15 novels and five novellas, plus nonfiction articles and hundreds of short stories. He often wrote about the plight of the poor and the need to reform living and working conditions.

His literary works include A Tale of Two Cities, Oliver Twist and David Copperfield, all of which were popular during his lifetime and still are. But it's  A Christmas Carol, the little book Dickens had to pay Chapman and Hall to publish because they didn't think it would sell, that may be Dickens' greatest legacy.

Adaptations of A Christmas Carol

A Christmas Carol has been adapted too many times to count, in every medium imaginable (books, film, cartoons, stage, public readings, television, radio) with new versions appearing every year. Scrooge himself has been immortalized and re-interpreted by actors in an array of movies, including the critically acclaimed 1951 film with Alastair Sim and the popular Muppet Christmas Carol starring Michael Caine in 1992. Even Bill Murray had a go in 1988 with Scrooged.

A sentimental favorite of mine is Mickey’s Christmas Carol (1983) that I watched with my children. Scrooge McDuck made a great Ebenezer Scrooge!

The very first film adaptation as far as anyone knows was a 1901 British silent film, titled Scrooge, or Marley's Ghost. The special effects are primitive compared to current cinema, but I'm sure the film was scary for its turn-of-the-century audience.

If you're curious, you can watch a 3-minute clip of this black-and-white silent on YouTube:

The Man Who Invented Christmas

More recently,  The Man Who Invented Christmas, starring Dan Stevens and Christopher Plummer, hit the theaters in 2017. It’s in libraries today, and currently available to stream on Hulu or rent/buy from Amazon and Prime Video. The film is based on the book of the same name by Les Standiford.

This adaptation is a new take on the classic story; here the focus is on Dickens himself. I found the film fascinating because it speculates on the people and events in Dickens' life that may have inspired him to write his timeless tale. I especially enjoyed the scenes where his characters come to life and help him write their story.

Here is a trailer for the movie:

The lasting impact of A Christmas Carol
It's undeniable that Dickens' story, written almost two centuries ago, inspired many of the Christmas traditions that are so dear to our hearts today.
Scrooge's transformation from an unloved miser to a beloved philanthropist has helped Christmas evolve into much more than an important religious holiday. It's also become an occasion to show appreciation for friends and family through joyful celebrations and gifts. Dickens reminded his readers to use Christmas as a time to express gratitude for what they have and give generously to those in need. And, of course, to have fun, too!
So, this season, the Christmas parties you attend, charitable donations you make, carols you sing and feasts enjoy may be an indirect result of the tremendous influence this classic tale of redemption has had on our culture. And it's all thanks to the imagination of Charles Dickens.
This is my last post for 2021. To borrow Scrooge's words at the end of A Christmas Carol:
"A merry Christmas to everybody! A happy New Year to all the world." 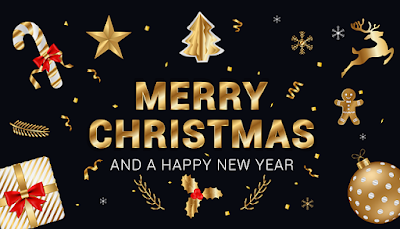 Sources for this post include:
Images courtesy of Wikimedia Commons