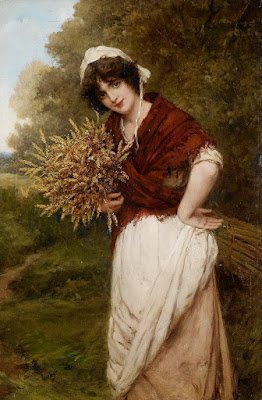 An ancient tradition, closely tied to gathering the harvest in centuries past, is enjoying a revival in our modern era of mechanized farming.

I’m talking about corn dollies, which usually aren't made of corn and don't necessarily resemble dolls.

To begin with, in Britain "corn" was traditionally used to describe any type of grain. A straw figurine or "corn dolly" was constructed out of the remains of the last few sheaves of grain harvested. However, a corn dolly can be made of wheat, barley, oats, rye, or even reeds. In Ireland rush was used; in France, palm leaves.

Corn dollies were made in ancient Greece, and also found tucked into the tombs of ancient Egypt. They were seen throughout Europe, and even in Africa.

Corn dollies were also a staple in Pagan ceremonies, and still are. According to the Pagan blog Sabbat Box, the term "dolly" may be slang for "idol", and the figurines were believed to contain actual spirits, specifically the "spirit of the grain."

Corn dollies as a harvest tradition

Ancient peoples believed the corn dollies they made protected the harvest spirits throughout the winter. In the spring these figurines were returned to the fields, to ensure a bountiful growing season in the following year.

According to the British organization Heritage Crafts, the making of straw figurines to represent an Earth goddess, spirits, or even a “sheaf maiden” goes back to the 16th century and probably even earlier.

However, these end-of-harvest straw figures only became more popularly known as “dollies” in the 20th century.  Before that they were known as harvest “tokens,” “trophies” or by some other name used by farmers in a particular region.

Corn dollies during the Regency era

During the 17th and 18th centuries, however, these figures became more closely associated with completing the harvest.

Jane Austen, who grew up in the Hampshire countryside, was no doubt familiar with these straw tokens. Perhaps she and her sisters even tried their hands at making them.

Agricultural methods became more industrialized during the 19th century, and the tradition of creating straw figures to celebrate the end of the harvest started to die.
However, since the mid-20th century interest in reviving this ancient skill has grown.

Corn dollies in the 21st century

What was once an endangered heritage craft is now a popular decorative art form.

Today corn dollies are considered good luck tokens and fertility symbols, and still used as harvest symbols. These straw creations come in a variety of shapes and may be decorated with bits of ribbons, lace, or other small ornaments. They've become sought-after gifts, house décor items, and tourist souvenirs.

Interested in trying to make a corn dolly of your own? This video by Sally Pointer makes the ancient craft look almost easy:

For some lovely examples of corn dollies and their uses check out the pieces created by Elaine Lindsay on her website, Something Corny. I also touched on the subject of corn dollies in this Regency Looking Glass post from several years ago.
I think no matter what their significance, historical or otherwise, corn dollies are beautiful. If they also bring you good luck, that's a bonus!