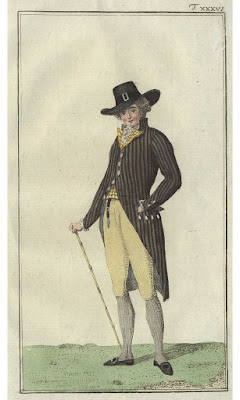 “To dress up as a man means wearing a suit,” declares fashion consultant Tim Gunn in his Fashion Bible.

That was true seven years ago when Gunn’s book was published in 2012 and it was also true centuries ago when Charles II of England decided that the men who came to his royal court had to follow a particular dress code.

The outfit that the king decreed acceptable in 1666 was the precursor to today’s three-piece suit. He said that a man's apparel had to include a long coat (the ancestor of today's suit jacket) with a waistcoat (today it's called a vest), a cravat (necktie), and of course, knee breeches (pants).

That sounds like a no-brainer these days, but earlier in the 17th century before Charles' reign, male fashion included pleated ruffs worn like a ring around the neck and doublets that today look like a woman's blouse.

But the style of today's suits really started to take shape during the Regency, thanks to the influence of George Bryan Brummell, better known as "Beau" Brummell.

Brummell was what we'd call a minimalist. He believed that men should avoid bright colors and excessive frills and accessories and instead embrace a pared-down, understated style.

All a man needed to look elegant, according to the Beau, was a pair of trousers, a trim waistcoat topped by a dark jacket and starched white linen shirt and cravat. He was also a proponent of frequent baths and scrupulously clean clothes - something we should all be grateful for.

This style differed markedly from the bright colors and lavish embroidery that was evident in men's clothing before Brummell's influence on the fashion scene. And though it's undergone some modification, the basic style Brummell set in the early 1800s has remained the standard for men's suits ever since.

But what I also find interesting about clothes is not just their style but also what they reveal about their wearers.

For example, I found a fascinating video produced by the National Museums of Liverpool illustrating how an upper-crust British man got dressed – or rather, was dressed - in the 18th century.

This video shows viewers more than just a man being outfitted in a period costume. Thanks to the skill of the actors, it also vividly portrays how an 18th-century man being dressed by a servant might feel about himself and his privileged place in the world.

As for the hard-working valet, you have to wonder how the servant really felt about his arrogant master. After all, in the time period shown in this video the French Revolution is just around the corner. And we all know how that turned out for the upper classes in France!

What I also find interesting about this clip is that the expensive clothes the man dons signify not only his wealth and social status but also how British imperialism and trade interests seeped into the fashions of the time.

The garment he lounges in at the beginning of the video is identified both as a “wrapper,”  a Japanese-inspired style, and a “banyan,” an article of clothing based on a gown worn in India.

Today, most men may not have valets to make them feel important, but some men can still afford to use their clothing – say, a $3,000 Italian  Armani suit or a $10,000 Swiss-made Rolex watch - to broadcast a “master of the world” vibe if they wish.

In any event, men's three-piece suits have been with us for some time and will probably to continue to dominate men's fashions.

As Mark Twain, who was another natty dresser, liked to say, “Clothes make the man. Naked people have little or no influence on society."