The Treaty of Ghent : “The Peace of Christmas Eve”

Christmas Eve can mean many things to people – including warm family gatherings, church services or presents opened under a Christmas tree.

But those of us interested in early 19th-century history may want to keep in mind that Christmas Eve, 1814, was the day the Treaty of Ghent was signed, putting an end to second and last time the United States fought the British, in the War of 1812.

The Treaty of Ghent, also known as the Peace of Christmas Eve, was the pact signed in the city of Ghent, Belgium (chosen because Belgium was a neutral country) that officially ended hostilities between the fledgling United States of America and the United Kingdom of Great Britain. (I say “officially” for a reason. Check this Friday’s post for more info on some unofficial military action that took place after the treaty was signed – the Battle of New Orleans.)

Peace talks started in Ghent in August of 1814. Chief negotiator for the Americans was future president John Quincy Adams, and his British counterpart was a man named Baron Gambier.

Britain may well have sent it’s “B team” to these negotiations; top British diplomats like Foreign Secretary Viscount Castlereagh and later, the Duke of Wellington, went to Austria to attend the Congress of Vienna, which was taking place at the same time.

So many wars, so many peace pacts to hammer out!

The Treaty of Ghent was approved by Parliament and signed into law by the Prince Regent right before the end of the year, on December 30, 1814. However, the treaty didn't go into full effect until it was ratified by the U.S. Senate a couple of months later, on February 17, 1815.

Why the war started

The War of 1812 was actually several years in the making. Tensions between Great Britain and the United States had been simmering ever since the end of the American Revolutionary War. The Treaty of Paris ended that war in 1783, but rather than diminishing American resentment against the British crown, those feelings grew over the following years.

But there were a couple of immediate causes that sparked the War of 1812. One was the Royal Navy blockade, intended to hurt Napoleon and the French economy but which also affected American trade with Europe.

The other was the Royal Navy’s habit of “impressment” – taking American sailors off their ships and forcing them to serve on British warships.

To counter heavy battle losses with Napoleon's forces, British naval officers supplemented their ranks with these involuntary American conscripts. The Royal Navy reasoned that “once a British citizen always a British citizen” and indeed, some of the American sailors were probably born before the Revolutionary War and the forming of the new nation. The British officers also found deserters from their own ranks aboard American ships, which only encouraged them to keep up the practice.

In any event, when Congress declared war in 1812 it wasn’t exactly a unanimous decision – it was the closest vote on any declaration of war in American history (70 to 39 in the House; 19 to 13 in the Senate.)

What followed that vote was a truly scattered, wide-ranging war, probably the most disorganized and disaster-prone in U.S. history. It ranged from the provinces of Canada to the Gulf Coast in Louisiana, and from the Great Lakes to the Atlantic Ocean. Native Americans fought on both sides, helping both the British and the American forces.

The United States did enter the war with a strategy of sorts, no matter how harebrained that strategy looks in retrospect. The idea was to conquer Canada, and then either hold the entire country for ransom, using it as leverage to get concessions from the British or failing that, to keep Canada as a consolation prize.

Understandably, the Canadians weren't too thrilled with this plan. And when the war was over, many Canadians felt that they were the true victors, since they'd successfully prevented an American takeover of their country.

While peace negotiations were being conducted in Ghent, the British were actively involved in four different invasions in America. The most notorious one was the British attempt to capture Baltimore. Along the way they decided to march on Washington, D.C. and burn the city down – most notably the Capitol, along with other government buildings, including the 3,000-volume Library of Congress and the White House.

And at the White House, First Lady Dolley Madison and her staff fled the oncoming troops in such a hurry that they didn’t even have time to clear the dinner table, on which a fine meal had been laid out. The British soldiers apparently enjoyed the food and drink before burning down the house. Talk about adding insult to injury!

Results of the war

Historians have more or less concluded that there were no conclusive winners in the War of 1812. No territory was gained on either side, and the borders of both the U.S. and Great Britain in North America went back to what they were before the war started.

Some argue that Great Britain actually won. Britain made no concessions on the maritime issues, such as the blockade or impressment, that had sparked the war. It didn't give up any of its North American territories and kept its Canadian colonies and Western forts. The war also put a stop to America's annoying repeated attempts to invade Canada.

And to top things off, the Royal Navy didn't stop impressing American sailors until after the Napoleonic Wars ended in 1815.

The war did have a few benefits for the United States, however. The Treaty of Ghent mandate that the countries involved in the war would return to the status quo antebellum - their pre-war borders - was actually a big win for the U.S., which didn't have to make any territorial concessions to Great Britain as a condition of the peace.

In this way, the Treaty of Ghent actually recognized U.S. sovereignty, giving the new country the respect from Great Britain that had been lacking. For this reason, the War of 1812 is sometimes described as "the second War of Independence."

Casualties are tough to figure precisely. Records weren't well kept back then, but with known data it's estimated that the United States lost about 2,260 men in battle.

That number jumps to almost 20,000 if you count the additional American lives lost due to injuries, sickness, and accidents caused by the war. The British probably lost about 10,000 combatants, while the American Indian tribes most likely lost about 7,500.

In terms of loss of life, the Native Americans on both sides of the conflict were hit the hardest, losing the greatest number of people in proportion to their populations.

Effects of the war

The war may have been short, but it did have a lasting impact on American culture. We gained a national anthem, the Star-Spangled Banner, which started out as a poem written by Francis Scott Key after he witnessed the British shelling of Fort McHenry during the Battle of Baltimore in September of 1814.

In that battle, the British sailed a fleet of 19 ships into Baltimore Harbor, defended by Fort McHenry, and sent about 5,000 soldiers overland to take the city. After a couple of days of fierce fighting and heavy shelling, the Americans won and the U.S. flag still flew over the fort.

Ironically, the American national anthem based on Key’s poem was set to the tune of a popular British song, written by Englishman John Stafford Smith. It’s Smith that Americans can thank for how difficult this song is to sing, as we try to warble through its daunting range of just over an octave and a half.

And finally, two expressions from the War of 1812 permanently entered the American lexicon: “war hawks” (referring to the Congressmen who were pro-war) and a catchphrase that’s still heard today: “Don’t give up the ship.”

Following the Treaty of Ghent, the United States has enjoyed an enduring peace with its northern neighbor, Canada. In the early 20th century, three memorials celebrating this peace were built: 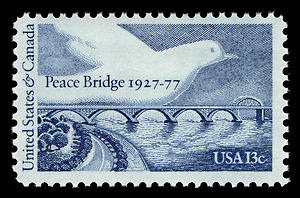 So, this holiday season, think of the Peace of Christmas Eve on December 24, 1814 – and perhaps you’ll be inspired to sing the Star-Spangled Banner along with your Christmas carols.

Here’s an audio sample of that anthem to inspire you, performed by the U.S. Army 1st Armored Division.

And to accompany the music, here’s a photo of the actual flag that flew over Fort McHenry in 1814. If you look closely you can see the beating it took from the bombardment. This photo was taken in 1873 and proudly displayed in 1914 during the National Star-Spangled Banner Centennial in Baltimore, Maryland. 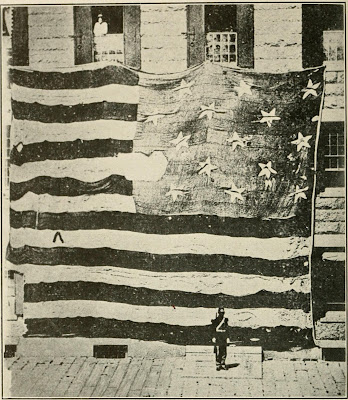 Email ThisBlogThis!Share to TwitterShare to FacebookShare to Pinterest
Labels: Politics and Wars