Congratulations to Prince Harry and Meghan Markle on their royal engagement

Just last week we were talking about the 70th wedding anniversary of Queen Elizabeth II and Prince Philip, Duke of Edinburgh. But now there’s even more royal marriage news to celebrate. As you've probably heard by now, Prince Harry (his royal title is actually Prince Henry of Wales) and Meghan Markle are officially engaged.

Markle is joining the highly select group of American women who have married into foreign royal families. Outside of Hallmark movies, where an American girl falling in love with a prince and becoming a princess is an oft-repeated and popular plot device, it rarely happens.

And, of course, Britons are not likely to forget Wallis Simpson, the twice-divorced American socialite who caught the eye of Edward, Prince of Wales, and for whom he abdicated his throne in 1937 after being crowned King Edward VIII of England. The relationship between Wallis and Edward precipitated a constitutional crisis.

Meghan Markle is also an American, and she's been divorced, too, but that’s where any similarities between her and Wallis Simpson end.

Unlike Wallis, Meghan was divorced long over before she met her prince.

And far from being the social climber Simpson was, Markle has had a professional career as an actor and model (she’s probably best-known in this country for her role as Rachel Zane in the USA Network show Suits).

She’s also been involved in charitable and humanitarian work around the world. In 2016 she was a global ambassador for World Vision Canada, traveling to Rwanda to support the Clean Water Campaign. She's also involved in other international issues, serving as an ambassador for the United Nations Entity for Gender Equality and the Empowerment of Women.

Finally, in contrast to Wallis and Edward, Harry and Meghan’s wedding won’t have any consequences that could affect the royal succession. For one thing, Harry isn't the reigning monarch, as Edward was. The Prince is currently fifth in line to be king, and after his brother's third child is born this spring, Harry will drop back to 6th position, making it highly unlikely that either he or his children would ever inherit the throne.

Readers of this blog may be interested to know that there's a Regency-era parallel to this marriage between an American and a Briton at the highest level of society, but the social leader in question was the son of an American president who would one day be a U.S. president, too, and it was his wife who was English.

When Louisa Catherine Johnson, an English girl of 19, met John Quincy Adams in London in 1794 and fell in love, she was destined to become not only his wife but also the first First Lady born outside of the United States. (There have been only two to date – Louisa and our current First Lady, Melania Trump, who was born in Yugoslavia, which is now known as Slovenia.)

Louisa had an American father and an English mother, but despite her paternal American roots, her husband's political enemies faulted her for being English. She came with Adams to America in 1801, and thereafter she divided her time between the Adams family seat in Quincy, Massachusetts, a home in Boston and a place in Washington, D.C. Her grandson Henry Adams said of his English-American grandmother that the fact that she was never fully accepted in Boston society was her “cross in life.”

Markle has announced that she will retire from acting (I imagine being a royal is a full-time job) and my guess is that she’ll immerse myself into the charitable work that Harry and the rest of royals do as a matter of course.

An announcement from Clarence House, the home of Prince Charles and his wife Camilla, the Duchess of Cornwall, said that Harry and Meghan's wedding will take place next spring. The announcement also said that additional wedding details will be revealed “in due course.” However, it’s already been reported by the BBC News that the wedding will be in May in St. George’s Chapel, Windsor Castle and that afterward the newly-weds will live in Harry’s current residence, Nottingham Cottage on the grounds of Kensington Palace. 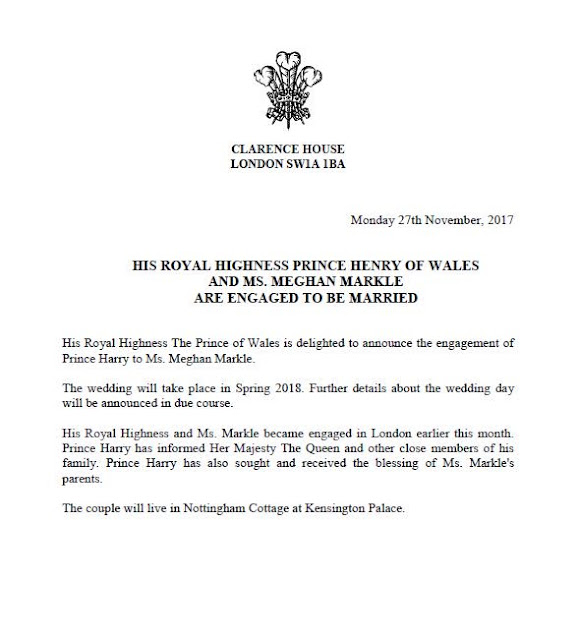 According to British online news source The Telegraph, it’s traditional for male members of the royal family to get a title on their wedding day (for Prince Philip it was the Duke of Edinburgh; for William it was the Duke of Cambridge) and it’s likely Harry will be given the currently vacant title of Duke of Sussex. If that does indeed happen, Meghan will become the Duchess of Sussex.

I’d like to join millions of others in sending the newly-engaged couple my congratulations and good wishes. And I like to think that Diana, too, if she were here would be just as happy as her son is about his upcoming nuptials.

All images courtesy of Wikimedia Commons