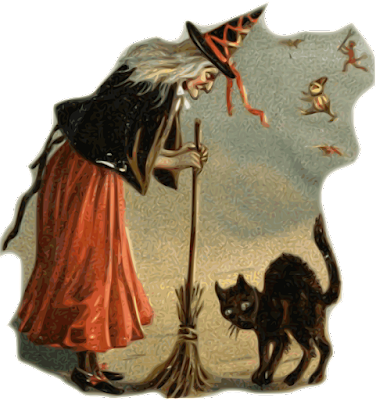 Along with jack o’ lanterns and black cats, witches are iconic images of our contemporary Halloween celebrations. But during the Regency, witches weren’t the comfortable and familiar holiday symbols that they are to us today. The history behind witches was too recent and too gruesome for that, and people living in England during the Regency would have been very aware of that history.

According to historian Suzannah Lipscomb, about 100,000 people across Europe were accused of witchcraft in the three centuries between 1482 and 1782, with an estimated 40,000 to 60,000 executed. Although the majority of the accused were women, they weren’t the only ones put to death for the crime of witchcraft - about a quarter of the victims were men.

In case you’re wondering, in America during the 1692-93 witch trials in the Salem, Massachusetts colony 20 suspected witches (14 of them women) were executed, all but one by hanging. (The unlucky exception was a man who was “pressed to death” by heavy planks and boulders.) Five other Salem suspects died in jail. And during the witch craze in America, there were victims in other areas, not just in Salem.

The British Isles also had its share of witch trials during this period. A famous one took place in North Berwick, Scotland and involved the Scottish monarch, King James VI. (After England and Scotland unified in 1603 he became King James I of England and Ireland.)

King James believed that a coven of witches had deliberately stirred up storms in the Firth of Forth as an assassination attempt on him and his wife, and also to disrupt shipping. One poor woman was tortured till she was confessed that she was in league with the devil and did indeed conspire against the king. She was garroted and burned in 1591.

As a result of his personal interest in witchcraft, in 1597 King James wrote Daemonologie, a text that Shakespeare used as a source when writing Macbeth.

Laws criminalizing witchcraft were passed and there were more incidents in Britain, many during the 17th century. In 1621 there was a sensational case in Lancashire centering on the members of two families living in Pendle who were accused of practicing witchcraft. Along with the “Pendle witches" another group known as the “Samlesbury witches” were also tried, though they later acquitted.

Following the trials, two men and eight women were hanged in Lancaster. The victims probably would have been joined by another family member, an 80-year-old woman, if she hadn’t died in prison awaiting her trial.

And back in Scotland, in 1697 six people were hanged and burned on the word of an 11-year-old girl, ironically named Christian Shaw. There would have been seven executions resulting from her lies if one of the accused hadn’t committed suicide in jail.

This madness came to an official end in 1712 when Queen Anne pardoned Jane Wenham, the last woman in England convicted of witchcraft.  My favorite part of that trial was Judge John Powell’s response to a witness who claimed that one of the demonic powers of the accused was the ability to fly through the air.

The judge noted dryly that there was no law against flying.

Jane was still convicted. But following the Queen’s pardon, she was able to peacefully live out the rest of her life, until her death in 1730.

So, people were no longer executed for witchcraft after Queen Anne's intercession, and the Parliamentary Acts regarding witchcraft were repealed in 1736.

However, that doesn’t mean everyone stopped believing in witches.

That’s something Ann Izzard, who lived in Cambridgeshire in 1808 in the village of Great Paxton, found out the hard way. Her fellow villagers began to suspect her of practicing witchcraft when things started to go wrong in their lives. The “evidence” included fits and bouts of depression among some local young women. And a man on his way home from the market claimed he saw his cart magically overturn.

Clearly, there was a witch at work, or so the villagers believed, and the bony finger of suspicion was pointed at Ann.

On a Sunday evening in early May, a mob gathered outside the cottage where Ann and her husband lived. They broke into her house and dragged her outside, partially naked, where she was clubbed in her face and stomach. Other members of the mob scratched her hard to make her bleed, in an attempt to get the witchcraft out of her body.

But the abuse didn’t stop there. The next day, the villagers turned their attention to a neighbor, a widow accused of harboring Ann. Finally, when rumors began to surface that Ann was about to be “swum” to determine for sure if she was a witch,  Ann decided to get the heck out of town.

(“Swimming” was one of many tests used on suspected witches. Like similar tests, it was a lose-lose proposition for the unfortunate accused. The test involved tying up a suspected witch, hand-to-foot, and throwing him or her in the water. Sinking and drowning was proof of innocence. Floating was proof of guilt, in which case execution was the likely result. As you can see, there was no good outcome for the unwilling takers of this test.)

If you overlook the beating she took, Ann’s story doesn’t end too badly. Once she was away from her charming village, she brought charges against her persecutors. At the next assizes or local court session, nine villagers were prosecuted for what they did to her.

Now Ann’s story took place well after the so-called period of Enlightenment in Europe when rational ideas were supposed to replace superstitious beliefs. And yet the people in her village were just as convinced as their medieval ancestors that witches were real and powerful – and hence, it was okay to torture and /or kill them.

So this holiday, when you see cute paper cut-outs of witches or children wearing pointy black hats and carrying brooms, it’s important to remember that those are more than just fun symbols. They are reminders of a shameful time in history, when superstition, fear, and mob psychology made people do terrible things to innocent victims.

I wish the witchcraft hysteria of centuries past was a unique example of man’s inhumanity to man. But alas, it’s not even close to being the sole instance of institutionalized cruelty, nor is it likely to be the last.

And that’s a truly terrifying thought for Halloween, scarier than any ghost or goblin. 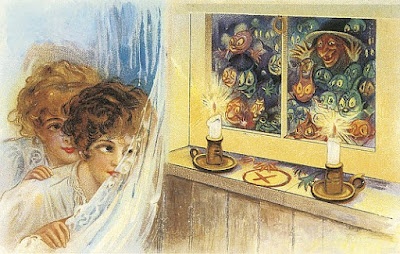 Images courtesy of Pixabay and Wikimedia Commons
at October 11, 2017