“It was a dark and stormy night . . .”
That’s probably the most mocked opening line in English literature, credited to Edward Bulwer-Lytton for a novel he wrote in 1830 (an annual contest for the worst story intro is now held in Bulwer-Lytton’s honor, with hilarious results).
Yet, if you change the word “night” to “afternoon” and make the setting a lake surrounded by the Alps, you have the backdrop for the creation of one of the most famous monsters in literature. And this literary creation was dreamed up during the Regency by an 18-year-old girl caught up in a scandalous affair.
So, here's a list of monsters and other scary things that disturbed the sleep of people during the Regency, starting with the monster that was born on that "dark and stormy" afternoon 200 years ago.
Frankenstein
Picture this: a rainy afternoon on the shores of Lake Geneva. Huddled in a manor waiting out the storm was a group of bright, young creative types, including the Romantic poets Lord Byron and Percy Bysshe Shelley, and Mary Godwin, the teenage girl Shelley fled with to Europe, leaving his pregnant wife and their daughter behind in England.
Rounding out the little group was Mary’s stepsister Claire Clairmont (who was Byron's on and off again love interest) and John William Polidori, Byron’s personal physician.
It was the summer of 1816, known as the Year Without a Summer because of sub-normal temperatures and other weather anomalies likely caused by a massive 1815 volcanic eruption in the Dutch East Indies. Bored and tired of being cooped up indoors, the group needed something to do. So Byron proposed a contest to see who could write the best ghost story.

Only Mary completed the task. She told the tale of a scientist who tried to make the perfect man by cobbling together pieces of executed criminals. The man Dr. Frankenstein creates and names after himself is a monster who terrorizes the doctor’s family as well as the local villagers. Though the monster is hideous, he’s also a pathetic creature with feelings, whom nobody loves and who comes to a tragic end.
In the months that followed Mary polished her work and Frankenstein, or the Modern Prometheus, was published in 1818, to the shivery delight of Regency readers. The success of Mary’s novel and the death of Percy’s wife Harriet allowed Mary and her lover to wed, though their union didn’t last long – Percy drowned in a boating accident in 1822.
Vampires

Polidori took advantage of Byron’s ghost-story challenge to start a story about vampires, drawing on old legends and bits of something he’d heard from Byron for inspiration. He didn’t get a chance to finish his tale that summer; Byron dismissed him, and the doctor traveled for while in Italy before returning to England.

But Polidori did eventually finish his story, and in a classic good news/bad news scenario “The Vampyre” was accepted for publication in the April 1819 edition of The New Monthly Magazine. Polidori’s sinister tale has the distinction of being the first vampire story written in English.
That’s the good news. The bad news is that the story was published under Byron’s name. Byron was as upset about this turn of events as Polidori, and both men tried to correct the mistake. Byron even had his own vampire story, “Fragment of a Novel” published in an effort to clear up any confusion about who authored “The Vampyre.” But many people still attributed Polidori’s work to Byron. (For more on this subject see my post "Vampires: The Regency Bites Back.")
This probably didn’t help Polidori’s mental outlook – he died depressed and in debt (he was a gambler) in the summer of 1821 when he was only 25 years old. Though it’s not officially recorded that way, there’s some suspicion his death may have been a suicide, via cyanide.
Now, I don’t know what may have tipped the balance in Polidori’s mind, but I do know that authors hate having someone else get credit for their work.

Zombies
And in case you were wondering, zombies also made an appearance at this point in time. The word zombie was first recorded in English in 1819 (apparently a banner year for creepy stories in English literature) by Robert Southey, a poet and friend of Shelley’s who described a “zombie” in a book he wrote about the history of Brazil.
The idea of a reanimated corpse terrorizing the living wasn’t entirely new in England; in the 12th century, a priest named William of Newburgh wrote a history of England in Latin that was full of interesting stories. In one of them, he warned his readers about "revenants" - corpses who "returned" (from the French "revenir") from their graves.

Personally, I hate it when that happens, though I'm sure fans of The Walking Dead would disagree.
So in one form or another, zombies were around during the Regency. (And I'm not counting Pride and Prejudice and Zombies, a 21st-century zombie-fied parody of Jane Austen's classic Regency novel.)
Of course, I wouldn't object if you wanted to classify Frankenstein as a zombie, too, since he was a man of many parts, with most of those parts already dead.
And finally, the Corsican Monster
No list of Regency monsters would be complete if I omitted the scariest one of all to English people during this time period – Napoleon, dubbed “The Corsican Monster” by his enemies was widely feared as the potential invader of the British Isles. He was regarded as a ruthless tyrant, capable of anything, and the English hated him with a deep passion.

Napoleon wasn’t afraid of the Catholic Church, French revolutionaries, the British army, or indeed anyone – after all, he pretty much conquered all of Europe while he was at the helm in France.
Napoleon and cats

There was one thing that may have instilled terror in the French Emperor or at least one of his descendants: cats.
It’s been printed, though possibly erroneously, that Napoleon had ailurophobia, the fear of felines. But even if Napoleon himself wasn't afflicted by this phobia there's evidence that his nephew, Napoleon III, had it bad. By some accounts, Napoleon III was so afraid of felines he’d climb onto a sofa or chair if he spotted a cat in the room.
From what I've been able to tell, the first Napoleon wasn’t particularly fond of cats (unlike dogs and his underlings, they weren’t particularly good at following orders) but he wasn’t afraid of them, either.
Yet stories persist that Napoleon was superstitious about black cats, even if he didn't fear them. According to one story, the Emperor saw a black cat just before the Battle of Waterloo, and it proved to be a bad omen, presaging his loss to Wellington. But that tale may just reflect the widespread superstition in Europe during the Regency that black cats were unlucky. Meanwhile, back in England, black cats were considered good luck, and the Waterloo story just underscores that belief.
In any case, it’s a safe bet that Napoleon and his nephew wouldn’t have much cared for some of our vintage Halloween decorations. 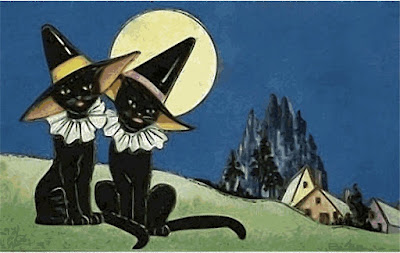 Much less the real thing:

It's their loss. In my book, cats are better than emperors any day - or in any era.

Resources for this post include The Regency Redingote and The Connexion: French News and Views
at October 04, 2017