Will you be dressing up this Halloween? If you love the simple elegance of a ghost costume, you may want to hear about a Regency “ghost” who met an untimely and undeserved end.

In late 1803 the residents of Hammersmith (which is now a part of Greater London but was then a small village about five miles west of the city) were in a panic. A number of the villagers claimed that had seen a ghost – a few went so far as to say the ghost had attacked them.

Many believed that the ghost in question was the spirit of a man who had killed himself the year before. This man was buried in the churchyard at Hammersmith, which was actually against church law and the prevailing customs of the time.
Since suicide was considered a grave sin against God, people who died that way were not supposed to be buried in consecrated ground. (Instead they were often buried at a crossroads outside of town.) It was believed that the soul of a suicide victim who was buried in consecrated ground would be unable to find eternal rest, and would wander the earth. 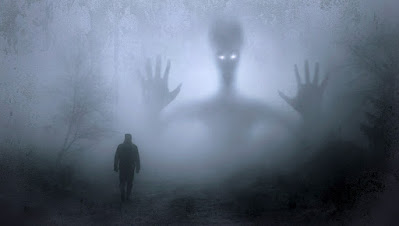 And that’s why the people of Hammersmith were convinced they now had a ghost on their hands, and a vicious one at that. Villagers reported seeing a ghost in the churchyards, and even being grabbed by the specter. So nightly patrols began, with armed men searching for a ghost.
And eventually they found one. On the night of January 3, 1804, a 29-year-old excise officer named Francis Smith fired his blunderbuss and killed the “ghost,” who turned out to be Thomas Millwood, a local plasterer who was on his way home from work.

When he was shot the unfortunate Thomas was wearing his work clothes, common to all in his trade, which happened to be white linen pants (freshly washed and very clean) a new white waistcoat (or vest), also white, and a white apron tied around his body.
In addition, he was coated with white plaster dust after working all day. In other words, he was dressed like a ghost, which may not have been the smartest move on his part given the hysteria in the village.

Millwood lived in the home of Mrs. Fulbrooke, who testified at the subsequent trial that she had warned him not to go out in his work clothes, or at least cover them with a coat. Apparently Thomas had scared others in the village during the ghost frenzy. But Thomas didn't listen to her.

On one occasion, Thomas frightened some ladies who saw him from their carriage as he was walking along a terrace. The gentleman who was riding with the ladies said something like “there goes the ghost,” which Thomas didn't appreciate.
According to Mrs. Fulbrooke’s account, Thomas answered with “a rude word” (we can only imagine what it was) saying he was no more a ghost than the gentleman was, and offered to punch him in the head. Too bad Thomas didn't learn anything from this encounter.

Because he killed an unarmed man, Francis Smith was charged with willful murder. But Smith pleaded self-defense. He claimed that he’d called out “stop or I’ll shoot,” and the ghost proved he was an apparition by not stopping. (Why Smith, or anyone for that matter, thought you could stop a ghost with bullets wasn't addressed.) However, Millwood’s sister testified that Smith more or less fired his gun as he was saying “stop or I’ll shoot” not allowing his victim any time to consider his next move.

This turned out to be a landmark case, hinging on the court’s determination of what constitutes self-defense. Could Smith get off the hook because he believed he was defending himself against a ghost, even though the ghost turned out to be a man? It actually took the courts 180 years to grapple with the legal issue of how to treat someone who commits a crime based on a mistaken belief.

The jury was reluctant to convict Smith. They decided on a verdict of manslaughter, a lesser charge than murder. But the chief judge returned the verdict, telling the jury they had to look at the facts and either convict Smith of murder or acquit him, regardless of whether Smith thought he was shooting a ghost. So the jurors convicted him.

Smith was sentenced to hang for his crime, with his body to be dissected later (a common practice on executed criminals). But the judge reported the case to the king, who had the power to commute the sentence. Smith ended up doing a year of hard labor for his crime.

And Thomas Millwood? Ironically, he may have become a real ghost - he is said to haunt the Black Lion pub in Hammersmith, where his body was taken after he was shot.
A final note about this strange case: the furor caused by the trial prompted an old man with a guilty conscience to step forward. The village shoemaker confessed that prior to the shooting he’d taken to donning a white sheet and lurking in the churchyard, pretending to be a ghost to frighten his apprentice.
Apparently the apprentice had been scaring the old man’s children with ghost stories, so the shoemaker had decided to teach him a lesson. No doubt the shoemaker's prank ignited the ghost mania in the village and ultimately cost poor Thomas his life.
The moral of this story, if there is one, is not to be too quick to react violently if you think you see a ghost this Halloween. And if there are any vigilantes in your area gunning for a ghost, you might want to consider a different costume.

***
Photos courtesy of Pixabay and Wikimedia Commons
at October 24, 2013