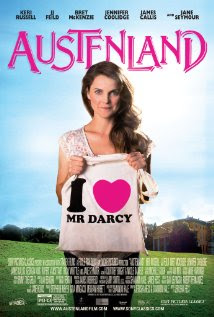 Have you ever dreamed of living in a Jane Austen novel? Would you spend your life’s savings to indulge that fantasy?

You would if you’re like Jane Hayes, the heroine of Austenland, a new Sony Pictures Classic release based on Shannon Hale’s book of the same name. Jane is a 30-something New Yorker who has spent much of her life obsessed with the Regency era in general and Jane Austen's books in particular. So she jumps at the chance to go to England and immerse herself in Jane Austen’s world.
Jane is played by Keri Russell, and the excellent cast includes several faces you may recognize (Jane Seymour, Jennifer Coolidge) and some you may not (JJ Feild, Bret McKenzie). "Austenland" in the film is actually West Wycombe House in Buckinghamshire, England.

“What separates the casual Jane Austen fan from the aficionado?” asks Mrs. Wattlesbrook, who runs Austenland. “The number of times she’s read Austen’s novels or her consuming love for Mr. Darcy?”

Jane qualifies as an aficionado on both counts, and she eagerly shells out her hard-earned cash for what she hopes will be a life-altering vacation. Unfortunately for Jane, her life’s savings only pay for the cut-rate Copper Package, and she’s forced to assume the role and the drab clothing of Miss Jane Erstwhile, “an orphan of no fortune.”

So Jane spends her days embroidering samplers and trimming hats, and her evenings in conversation and whist. Will she have found her very own Mr. Darcy by the end of her stay, or will she continue to believe that “the only good men are fictional"?

Despite its wisp of a plot this is a fun movie, even though at times Jane is almost too naïve to be true, especially at the beginning. I found it to be quite entertaining, and I think it would be a treat for anyone who’s ever enjoyed a Jane Austen novel. Some of the most amusing bits in the film come from the juxtaposition of the pretend Regency life so eagerly embraced by the paying guests at Austenland against the real lives of the actors who are employed to present that fantasy.

This isn't just a chick flick; your boyfriend or husband may enjoy it, too, especially if he’s ever had the urge to punch Mr. Darcy in the face for being the idealized suitor no man can compete with.

Here's the movie trailer to whet your appetite: