Regency Superhero: The Duke of Wellington

Superhero movies have been big box office lately, especially with this summer’s blockbuster Man of Steel, the latest retelling of the Superman legend. Earlier this year Ironman 3 capitalized on the success of Ironman 1 and 2, and movies based on other DC and Marvel comic book heroes such as Spiderman, The Avengers, Batman and Thor have been wildly successful as well.

Though there was no caped crusader coming to the rescue of London during the Regency, the period did have its superheroes, and like the comic book heroes I referenced these men were regarded by the populace as saviors. Chief among these was Arthur Wellesley, better known as the Duke of Wellington.

Born in Ireland in 1769, young Arthur joined the British Army as an ensign in 1787 and went on to play a key role in the Peninsular Wars, rising eventually to the rank of Field Marshall.  Under his leadership the French were defeated at the Battle of Vitoria in 1813, and that victory earned him a dukedom.
When Napoleon escaped from his exile on Elba in 1815 and tried to reclaim his empire, Wellington soundly defeated him again at Waterloo.

Wellington’s decisive victory ended a series of wars that had begun in 1803, and it collapsed once and for all Napoleon’s dream of dominating Europe. Wellington died in 1852, after receiving numerous accolades and serving two terms as an elected Prime Minister. He was officially the Commander-in-Chief of the British Army until the day he died. 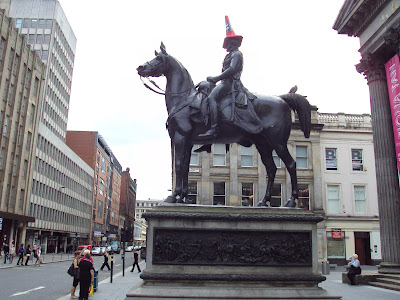 The Iron Duke and the Ironman – the parallels between Wellington and a comic book superhero aren’t so far-fetched. And I’ll bet that like Ironman and other superheroes, Wellington wore a cape occasionally, too, even if it was just the shoulder cape (or capes) on his great coat.
In any event, Wellington will always be regarded as a superhero to the British for his decisive defeat of Napoleon at Waterloo.

Email ThisBlogThis!Share to TwitterShare to FacebookShare to Pinterest
Labels: Personalities, Politics and Wars