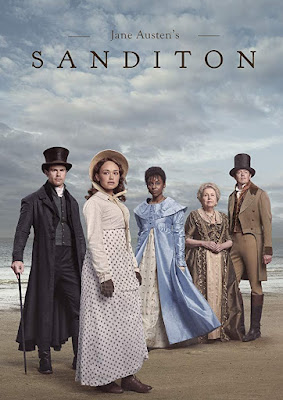 And all that was just in the first two episodes of Season One, which made its U.S. debut last Sunday, January 12.

But this new version also has a few extra elements you might not expect - I certainly didn't. It includes scenes of nude sea-bathing, something men did while their female counterparts changed into swimming costumes using cumbersome "bathing machines," also shown in the show.

There's even some implied sleazy sex - not graphic but unmistakable. This series is definitely a new take on a typical Jane Austen story.

But then, this isn't a typical Jane Austen story, if there is such a thing. Critics note that Sanditon is more like some of Jane's earlier, pre-published work, full of sly satire, caricature, and parody. It's decidedly different from some of her other books, especially the introspective Persuasion, which was her last completed novel.

In fact, when her family read the unfinished manuscript after Jane's death, they were appalled by its tone and the way the story was unfolding. For many years the Austens only allowed snippets of the book to be seen. 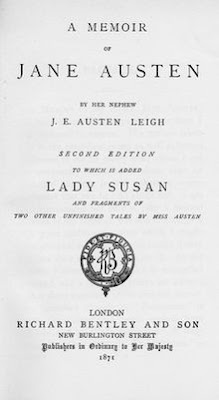 Sanditon in its tantalizingly unfinished state has intrigued Jane Austen fans and literary scholars for 200 years. Most fans agree that our favorite author left us with far too few books. Indeed, the six main novels published during and just after her lifetime are the basis of almost too many movies and mini-series to count. If you don't believe me, look up Pride and Prejudice on the Internet Movie Database (IMDb). You'll get 200 results!

Some bits of Sanditon first appeared in A Memoir of Jane Austen, written by Jane's nephew, James Edward Austen-Leigh, and published in 1869. It took until 1925 for all of Jane's original work on the book to see print.

Fifty years later in 1975 (two centuries after Jane's birth) a full facsimile of the incomplete manuscript was published. That year author Anne Telscombe's completed version of the story also hit the bookshelves. And IMDb shows that a Sanditon movie was made in the UK as recently as 2014.

Now, I've always been skeptical of efforts to complete an author's unfinished work, especially when the author is as beloved as Jane Austen. Who are we to know what was in her head, what she envisioned for her story? And who would dare to emulate her incomparable style?

Andrew Davies, that's who. The 83-year-old distinguished writer and producer certainly has the right credentials for the job. He's has written hundreds of episodes for productions including House of Cards, Les Miserables, War and Peace, and Doctor Zhivago,  as well as adaptations of such Austen novels as Pride and Prejudice (the popular 1995 mini-series with Colin Firth), Northanger Abbey, Emma, and Sense and Sensibility.

Sanditon, is, of course, a romance, but like Jane's other novels it has other layers as well. In particular, it looks at the effect of commercialism, the perils of entrepreneurship and most of all the changing face of rural Britain in the early 19th century when industry and enterprise began to edge out traditional ways of life like farming and fishing.

In the story, Tom Parker invests all his efforts and financial resources into transforming a sleepy fishing village on England's southern coast into a trendy seaside resort. To make his risky venture profitable and popular, Tom's enlisted the help of his more socially-connected brother Sidney, who moves in the same fashionable London circles as the Prince Regent. Tom hopes Sidney will help draw well-heeled visitors to Sanditon, possibly even the Prince himself.

Securing Prinny's interest in the new resort would be a dream come true for Tom. He knows that royal patronage would attract other aristocrats to Sanditon and establish its reputation. In real life the future George IV was a big fan of seaside resorts; his elaborate residence, the Royal Pavilion, helped complete Brighton's transformation from an ancient fishing village to an 18th-century health resort to the most fashionable place in Regency England outside of London.

There's another Parker brother, too, in Jane's story - the kind-hearted and silly Arthur. (No wonder Jane's original title for her last book was The Brothers - her family changed it to Sanditon after her death.)

Arthur epitomizes the hypochondriacs and imaginary invalids who are drawn to seaside resorts for health reasons, people who Austen satirizes so gleefully in her story.

It's worth remembering that Jane was often an invalid herself during this last stage of her life, a condition she detested. And it's rather poignant that the enthusiastic Tom Parker claims that Sanditon's sea air is a sure cure for a whole array of ills, including biliousness. Jane erroneously believed that her illness was caused by an excess of bile in her system.

But sadly, no "anti-bilious" cure would've helped Jane avoid her early death. Today most scholars believe the symptoms she described in her letters indicate Addison's disease, for which there was no diagnosis much less treatment in the early 19th century.

But though the Parker brothers are at the center of the story the other characters are marvelous, too,  from the imperious Mrs. Denham, who holds the whole Sanditon financial enterprise hostage with her fortune, to the innocent Charlotte Heywood, through whose eyes we see the town and its inhabitants.

The cast also includes the unhappy and rebellious heiress from the West Indies, Georgiana Lambe; the dastardly Sir Edward Denham and his scheming step-sister Esther; Clara Brereton, Mrs. Denham's ward and poor relation; and of course, our hero Sidney, who is insufferably rude to poor Charlotte in these first two episodes.

All these characters come straight from Austen's mind and pen. However, even in these first two episodes, Davies has added some scenes that I can't believe Jane would have imagined, much less add to the pages of her book. These scenes fit the story, and like the rest of Davies' script, they're well-written and well-acted. But are they true to Jane Austen as we've come to know her through her other books? Perhaps it won't matter as long as this new production honors the spirit of Jane's work-in-progress.

From what I've seen so far, Davies' adaptation of Sanditon is as fresh and invigorating as an ocean breeze. I was thoroughly entertained and can't wait to see more.

If I've made you curious and you missed Sanditon's debut last week, you can still see it - just go to the PBS website where you can stream the first two episodes.

Also, here's the PBS trailer, to give you a taste of what you'll see:

Have you seen Sanditon yet? Do you think Jane Austen would approve of this new television series based on her work? Please let me know in the comments below!