November is a month that here in the United States is defined by food, culminating in a huge Thanksgiving Day feast. It's also the month we honor our military veterans. So I'm going to focus on both food and patriotism - especially an Italian pasta product that became synonymous with a controversial English fashion and developed uniquely American associations.

During the 18th century, it was all the rage for young men of the English nobility to take a trip through Europe to soak up its art and culture. It was called the Grand Tour.

In Italy, these privileged lads discovered a pasta dish far removed from their usual British fare. It was called maccaroni, and they raved about it when they got back home. The travelers became known as the Macaroni Club, though there is no evidence an actual club ever existed.

But it wasn't their love of pasta recipes that made the club members distinctive. Along with foreign food, these young aristocrats adopted a style of dress and behavior that was vastly different than the norm.

Scorning the conservative tailoring and colors that most British men favored, these young men wore tight-fitting suits made of colorful silk, velvet, and gold or silver lamé, adorned with sequins and bows. They wore make-up and perfume, carried parasols and spoke with high-pitched accents. They also spent lavishly on other fancy accessories, like walking sticks, spyglasses, snuff boxes and shoe buckles.

Another must-have fashion feature was a towering, powdered wig, topped with an absurdly small hat, called a "macaroni," which supposedly could be removed with the tip of a sword.

With their outlandish clothing and extreme affectations, the Macaroni Men seemed like a strange new species, neither male nor female, to their stolid countrymen. With undeniably ambiguous sexuality, the Macaronis became a target of homophobic ridicule and condemnation. That was no small matter, because at that time homosexuality was a crime punishable by death.

And while the term "macaroni" may seem the same as “dandy" to our ears, the two styles of male dress were actually very different. Under the influence of noted Regency dandy Beau Brummell, dandyism was viewed as a restrained, masculine style. Today's male fashions still owe a lot to the style Brummell championed 200 years ago.

But the Macaronis weren’t fazed by criticism or caricature. And now, looking back over the centuries, their style could be considered an early forerunner to today’s transgender fashions.

The fad for this painted, foppish style reached a peak in the 1770s, which was the same time the British were having a spot of trouble with their American colonies. And that's where the song “Yankee Doodle Dandy” comes in.

It's an old melody, possibly a Dutch harvest song. The music itself is much older than any lyrics. It's a tune that goes back to at least to 15th-century Holland if not medieval times.

During the French and Indian War, British soldiers created a new set of lyrics to mock the Americans, and "Yankee Doodle Dandy" was born.

Here are a few of the many, many verses of the song that we sing today. (Note: Captain Gooding is probably a generic name for an officer in the Continental Army. And as for hasty pudding, it's a bowl of mush, made from wheat or cornmeal.)

Yankee Doodle went to town
A-riding on a pony,
Stuck a feather in his cap
And called it Macaroni

Father and I went down to camp,
Along with Captain Gooding,
And there we saw the men and boys
As thick as hasty pudding.

That's one popular version of the song. But it's not like the lyrics are set in stone. Oh, wait a minute – they are! 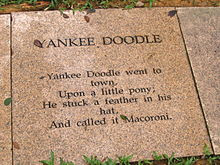 And here's how some of the slurs in the song break down:
Altogether, the song is the type of insult you'd expect from middle-school bullies on a playground.

There's a snobbish aspect to the satiric ditty as well. Macaronis were members of the British nobility and the stupid doodle thought it was enough to "stick a feather in his cap" to be accepted into that class.

But during the American Revolution, the rebels turned the tables. They embraced the song and used it to taunt their enemy. Captured British soldiers complained that they were forced to sing the song over and over again as a punishment. The captive redcoats got quite sick of it, and probably wished they'd never made those lyrics up in the first place.

Today Americans call themselves Yankee Doodle Dandies with pride. “Yankee Doodle” is the state song of Connecticut, one of the 13 rebel colonies. And then there's the New York Yankees, a professional baseball team.

So, Yankee Doodle lives on, but today most people think of pasta not people when they hear the word “macaroni."

However, there are some signs that Macaronis are becoming fashionable once again, minus the stigma they had centuries ago. Transgender models are making an impact on fashion runways around the world, and companies like Morphe and others promote cosmetics for the LBGTQ community. The taboo against men using beauty products and wearing makeup is rapidly fading.

There's even a modern-day Macaroni who's adopted the 18th-century term. Mark Thawin is a Thai hairstylist who uses the handle "macaroniii" for his Instagram account, where he regularly posts stylish photos of himself. He currently has over 24,000 followers.

However, in the US the term "macaroni" still has patriotic connotations, even though most of us have forgotten its original meaning.

And that's because of the widespread popularity of "Yankee Doodle."

In the 1960s, President John F. Kennedy gave his daughter Caroline a pony that the Kennedys named Macaroni in honor of the Revolutionary ballad.

And speaking of the 20th century, I have to mention the famous 1904 George M. Cohan song, "(I'm a) Yankee Doodle Dandy."

Cohan's creation made movie history when James Cagney performed it with his signature tap-dancing strut in the 1942 movie Yankee Doodle Dandy.

All things considered, macaroni is a pretty patriotic dish. Maybe it should be a Thanksgiving staple, right up there with turkey and cranberry sauce.

And don't forget the feather! A turkey feather will do.