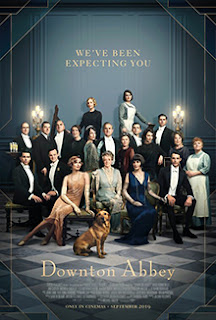 Striking a blow for those who love a little history with their cinematic entertainment, the movie Downton Abbey dominated the box office on its opening weekend.

According to Forbes Magazine, the film will take in about $31 million, easily trouncing its competitors, the sci-fi flick Ad Astra and the action-packed Rambo: Last Blood.

Some critics thought Downton Abbey's appeal would be limited to a specific demographic of die-hard fans of the original series or people enamored of British costume dramas in general.

But the box office doesn’t lie. Obviously, the film has a wide draw that spans age groups and interests. Or maybe Sylvester Stallone’s Rambo is just no match for Maggie Smith’s Dowager Countess of Grantham.

I thought it was great to see the familiar characters again, and the way the story played out was very satisfying. And from what I could tell, movie-goers in the packed theater agreed with me.

The film had drama, romance, gorgeous period-perfect clothes and witty repartee. There was also a whiff of revolution and just a frisson of class conflict between the Crawley family's social circle and the servants who make the aristocrats' way of life possible.

But the real star of the movie was Downton Abbey itself.

The Crawley's ancestral home is at the heart of all the action and its overriding purpose. In a way, the house is the film's central character. You can see this in the way the camera lovingly lingers over the building’s Gothic contours, showing the house silhouetted against the sky at dawn, at sunset, and all times in-between.

Really, this house should have its own IMDB profile page. If such a page existed it would reveal that the role of Downton Abbey, both in the movie and the television series is played by Highclere Castle in Hampshire, England.

This stately home was destined for stardom. Prior to Downton Abbey, it was featured in Jeeves & Wooster, the British television series of the early 1990s.

Just a week ago I was watching a DVD of the show and was startled to see Hugh Laurie’s Bertie Wooster character ambling around the castle’s distinctive exterior.

Highclere is described as a "country house" on Wikipedia but it's like no country house I've ever seen. It's a stunning architectural achievement, built in the 19th century in the Jacobethan style.

Equally impressive are the grounds of the 5,000-acre estate, which were designed by famous landscape architect Lancelot “Capability” Brown in the 1770s.

But Highclere’s history goes back much further than the 18th or 19th centuries. It began its life as a medieval palace built for the Bishop of Winchester in 749. Centuries went by and it was renovated and renamed Highclere Place House in 1679.

It wasn’t until 1842 that Sir Charles Barry took a break from designing the Houses of Parliament in London to create the Highclere Castle we see today.

But like many of Britain’s stately homes, including the fictional Downton Abbey, Highclere experienced hard times in the 20th century, following the stock market crash and two World Wars.

Historical note: Just like in Downton Abbey, the Fifth Countess of Carnarvon turned her home into a hospital for injured soldiers during World War I. And during World War II, airplanes from four different nations crashed on the estate during active service.

During the tough economic times of the last 100 years, the various Earls of Carnarvon have found it challenging at times to cover the cost of the upkeep necessary to maintain their 30,000-square foot home and its 300 rooms in good condition.

Cue Downton Abbey. The popularity of the television series and now the movie has been a financial boon for this historic landmark. Not only did the production crews pay for many of the castle’s needed repairs, interest in the show has boosted the number of tourists who come to visit, providing a tidy source of revenue for its current occupants, the 8th Earl of Carnarvon and his Countess.

According to Downton Abbey production designer Donal Woods, interviewed in the October 2019 issue of Elle Decor Magazine, prior to the television series Highclere Castle would get maybe 100 visitors in a weekend. Now during the tourist season, the castle gets about 4,000 visitors a day, says Woods.

In addition to adding new plaster and silk damask wall coverings to the interiors, Woods said the production crews also built new additions to the castle for the movie. These rooms, featured in the film, include a wine cellar, a room for storing the family silver, and retired butler Carson’s cottage.

If you travel to England, you can take a self-guided tour of Highclere and its gardens when the estate is open to the public during the summer months. And if you're a true Downton Abbey fan, you can even book a night's lodging in one of the castle's rooms through Airbnb.

But you don’t have to travel to England to tour a historic home and feel transported to another time. Though maybe not as grand, magnificent historic homes are sprinkled throughout the United States and other countries as well. Most of us even live within driving distance of at least one fabulous home.

For example, I live near Portland’s Pittock Mansion, which I’ve toured many times. It was the dream home of the London-born publisher of The Oregonian newspaper, Henry Pittock. In the early years of the 20th century, near the end of his long life, Henry built the mansion in the hills above Portland for his wife and family.

The house boasts a spectacular view of Mount Hood, a magnificent marble staircase and contained technological features that were cutting-edge for its time, like intercoms and a central vacuum system. It’s now a museum run by the city of Portland.

A thousand miles south of Portland in San Simeon is Hearst Castle, the sumptuous residence of publishing magnate William Randolph Hearst from the 1920s until 1947.

This over-the-top mansion was once the playground of Hollywood movie stars and celebrities from almost all walks of life, including Winston Churchill and P.G. Wodehouse (the author of those Bertie and Jeeves stories I mentioned above in conjunction with Highclere Castle). Hearst's old home is now owned and operated by California State Parks.

Every state has its architectural landmarks, steeped in history. Here are ten historic homes across the country that are well worth visiting if you’re in the area.

As for Highclere Castle, it’s one of many stately homes open to tourists in England. Here are a few more you can see if you’re planning a trip to Great Britain.

What about where you live? Is there a historic home you’d recommend to visitors? If you know of one, please share in the comments!

Email ThisBlogThis!Share to TwitterShare to FacebookShare to Pinterest
Labels: Architecture, Film and TV