June 18 marks the 204th anniversary of the Battle of Waterloo, which took place during the Regency in 1815. On that Belgium battlefield, Napoleon’s French soldiers engaged two of the armies of Seventh Coalition—the British allied forces commanded by the Duke of Wellington and the Prussian Army led by Field Marshal Blücher.

After a day of fierce fighting, the French lost and Napoleon ended up in exile once again, for the second and final time. But victory for the Seventh Coalition was by no means assured. As Wellington described it later, the Battle of Waterloo was “the nearest run thing you ever saw in your life.”

This bloody battle looms large in history for many reasons. It marked the end of the Napoleonic Wars, which had been going on since 1803 – an exhausting and expensive dozen years for Britain and Europe.

And the aftermath of this epic confrontation also spawned a common phrase in the English language. To “meet your Waterloo” means an ultimate and decisive defeat, even after a series of successes such as Napoleon enjoyed in his conquest of Europe prior to Waterloo.

Now, I’ve already written a couple of posts about Wellington and the Battle of Waterloo, so I won’t rehash the details here. What interests me today is the effect Waterloo has had on popular culture since 1815.

There are the inevitable memorials, of course, honoring Wellington and commemorating the battle itself. Scores of monuments, bridges, bays, roads and even an island in the Shetlands are named after Waterloo.

And since the British victory there have been more than 50 cities and towns christened “Waterloo” in at least seven different countries, including a Waterloo in my home state of Oregon.

Waterloo in Film and Song 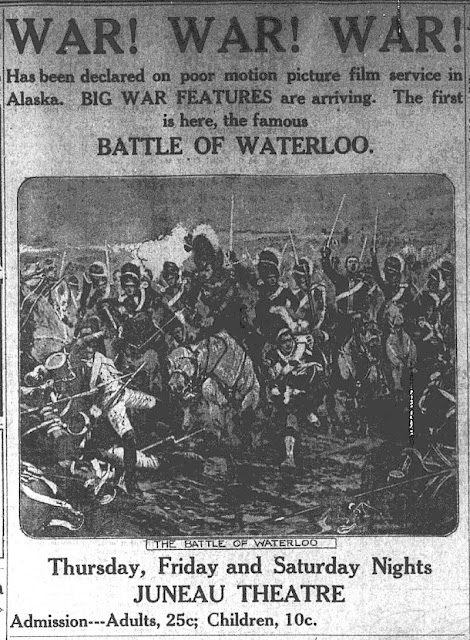 Also, since the advent of motion pictures the Battle of Waterloo has been immortalized in film many times. The very first film I know of was a 1913 British feature created in honor of the battle’s 100th anniversary. It was released in July of 1914 – coincidentally, the same month World War I erupted across Europe.

The Battle of Waterloo was a big production: in those pre-CGI (computer-generated imagery) days, the film featured an amazing 2,000 actors portraying soldiers, as well as 1,000 horses and 50 cannons. The movie was a huge hit, both commercially and critically. And I suspect this film was also a motivational tool for the British populace as they geared up for another war.

The Battle of Waterloo has been referenced in music, most recently in the lyrics of Abba’s “Waterloo,” a song whose popularity has revived due to the recent Mamma Mia! movies.

But for many people who remember the pop music scene of the 1960s, "Waterloo" evokes “Waterloo Sunset,” a song written by Ray Davies and recorded by the Kinks in 1967.

The song is actually about Waterloo Station in London, not the famous battle. A moody, reflective piece, it’s been described as the “most beautiful song in the English language” by music critic Robert Christgau,  praise that’s echoed in the comments on the song’s YouTube page.

The tune rose almost to the very top of the British charts in 1967 (it took the #2 spot) and it also ranked that year among the top 10 songs on the music charts in New Zealand, Australia and much of Europe.

If you're an American you may not be familiar with this song. Following its successful release as a single in the UK, the song didn’t even surface on the North American Billboard charts.


But its lack of ranking in the US didn’t prevent this Kinks song from gaining many devoted fans. In a 2001 article in The Herald, a Glasgow newspaper, Allan Laing called “Waterloo Sunset” a “perfect pop song” and the “apogee of the swinging sixties single.”

Three years later, Rolling Stone ranked the song at #42 in their list of the 500 greatest songs of all time. And since its debut, the song has been studied in universities and covered by a range of musical artists, including David Bowie and Def Leppard.

Davies has said that he wrote his song with childhood memories in mind. But even with similar associations, would the less melodic names of other London railway stations such as King’s Cross or St. Pancras have inspired him to produce this unforgettable piece of musical art?

Somehow, I doubt it. See what you think. Here’s “Waterloo Sunset” by the Kinks:

For more on the Regency and the Battle of Waterloo see:

Email ThisBlogThis!Share to TwitterShare to FacebookShare to Pinterest
Labels: Art and Culture, Politics and Wars