I recently discovered that the mothers of the adorable bridesmaids and page boys at Prince Harry and Meghan Markle’s wedding (a group that included 3-year-old Princess Charlotte) bribed their kids to behave with candy (Smarties) and promises to watch the Peppa Pig show after the wedding.

I’m proud to say that I know what, or rather who, Peppa Pig is, though I had to look up the difference between American and British Smarties.

But my Peppa knowledge is fairly new, due to the influence of the 3-year-old in my life, my granddaughter.

Peppa Pig is currently her favorite thing in the world. She watches episodes of the British animated television series on the Nickelodeon channel and video clips of it on YouTube. She also has Peppa Pig storybooks, Peppa Pig t-shirts, and two Peppa Pig dolls.

And I know for a fact that my son and daughter-in-law, like Prince William and Kate, have found Peppa Pig useful as a bribe.

I won’t argue with my granddaughter or Princess Charlotte, but I’m not sure I trust Peppa Pig and her porcine family. They snort when they talk and pronounce “zebra” as if it rhymes with “Debra” and not “Libra.”
That’s the difference between British and American pronunciation right there, and also why I’ll never pass for a Brit, no matter how much I learn about British history and culture. As George Bernard Shaw is supposed to have observed, the United States and Great Britain are two countries separated by a common language.

Children have been drawn to toys and dolls and candy since the beginning of time. I’m not exaggerating all that much; thousands of years ago Egyptian kids had dolls with moveable arms and legs and wigs. In 2004 archaeologists digging on an island off the coast of Italy unearthed the head of a stone doll, along with a set of tiny kitchenware, believed to be 4,000 years old.

Here’s a photo of an ancient Greek child’s toy that was made almost a thousand years before the birth of Christ: 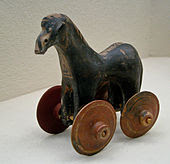 In Regency times children played with dolls and toys, too. Rolling hoops was a popular pastime, so much so that by the end of the 18th century children rolling hoops through the streets of London were considered a nuisance.

Dolls were in demand as well. Here’s little Princess Beatrice, Queen Victoria’s daughter, with her doll when she was almost the same age as Princess Charlotte. That doll must have been important to her to be included in her portrait. In fact, I can imagine the little princess refusing to cooperate with the painter unless she could hold her doll.

And here’s an 1820 drawing showing upper-class Regency kids in their family schoolroom, clearly playing with toys instead of doing their schoolwork. All, that is, except for the poor girl on the right who's doing her best to do her lessons while her brother tries to distract her by putting the family cat on her back. 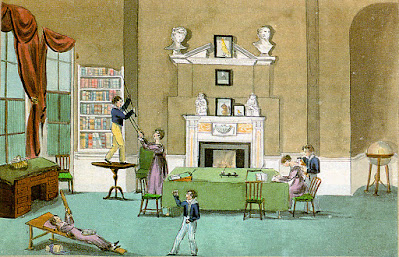 If only their parents or governess had Smarties or a Peppa Pig show to bribe them with! But alas, chocolate candy wouldn't be invented for another couple of decades, and they'd have to wait almost two centuries for Peppa. (For more on the development of the chocolate candy we know and love today, see this post.)

Anyway, it's nice to know that Peppa Pig, had a role, however minor, in Harry and Meghan's royal wedding.

Photos courtesy of Wikimedia Commons and Pixabay
at June 03, 2018