Echoes of the Regency in Harry & Meghan’s royal wedding

It’s been a while since I posted here - I’ve taken a hiatus to work on a new book. But I just can’t let the wedding of Prince Harry and Meghan Markle pass without comment, especially since I've found a  few parallels between this modern event and the Regency era.

But first I have to note that Meghan, unfortunately, has had to endure a lot of family-related drama and heartache this past week, marring what should have been a happy build-up to this weekend’s ceremony.

Her father, who was supposed to walk her down the aisle at St. George’s Chapel Saturday, dropped out at the last minute because of the scandal that erupted when it was discovered he’d sold staged photographs of himself prepping for the royal wedding.

The Queen, according to some reports, was not amused by the publicity stunt. And Thomas Markle said he was very embarrassed by the whole affair.

Hard on the heels of that scandal came the news that Meghan’s father had a heart attack, followed by heart surgery this week. And if that wasn’t enough to make his daughter distraught just before her wedding day, there’s been additional drama involving her estranged half-siblings, a brother who's alternately publicly dissed her and asked for a wedding invitation, and a sister who claims she was in a paparazzi-induced car accident this week, though so far no evidence of the crash has been found.

It’s enough, I’m sure, to make the happy couple consider eloping – if only they could.

But this isn’t the first – nor is it likely to be the last – royal wedding that has had last-minute glitches. The Prince Regent’s 1795 marriage to Caroline of Brunswick was by all accounts a disaster. It even started out badly. Upon meeting each other for the first time, just prior to their wedding, the bride and groom took an immediate and strong dislike to each other.

Prinny coped with his feelings by being drunk at his wedding and all through his wedding night, which his bride said he spent mostly passed out on the floor of their bedchamber. The unhappy pair did their duty and had conjugal relations, according to the prince, exactly three times – twice on their wedding night and once the next day – after which they settled into a pattern of mutual dislike and avoidance.
Though their union was epically horrible, Prinny and Caroline did manage to conceive Princess Charlotte of Wales. (If that name sounds familiar, it’s because there’s another Princess Charlotte alive today – little Princess Charlotte of Cambridge, daughter of the Duke and Duchess of Cambridge, better known as Prince William and Kate Middleton.)

Coincidentally, there may be another link between the Prince Regent and this weekend’s nuptials. Some historians believe that like Meghan Markle, Prinny’s mother, Queen Charlotte, was bi-racial, with African ancestors. These historians argue that the Queen’s mixed-race background was kept hidden due to the racism that was then prevalent among European royalty and the general populace.

I’m proud that we live in a time where Meghan Markle’s mixed-race ancestry is not only openly discussed it’s celebrated, by her and millions of well-wishers.

Queen Charlotte was a devoted wife to King George III, bearing him 15 children. Their union lasted until her death - 57 years. That’s a British royal marriage record that only one another royal couple has beaten so far - Queen Elizabeth and Prince Phillip with their 70-year union. And, in yet another twist of fate, Queen Charlotte is buried in St. George’s Chapel at Windsor Castle – the same place where Harry and Meghan will be married on Saturday.

You know I’ll be glued to the television Saturday morning, though I’m not sure I’ll be awake to watch the ceremony take place live at 4 a.m. in the Pacific Standard time zone where I live.

I’ll mark the occasion with a cup of American coffee (for Meghan) and an English crumpet (for Harry). I'll give more than a passing thought to Princess Diana, whom I'm pretty sure would've absolutely loved her new daughter-in-law.

So here’s my toast to the wedding of Prince Harry and his lovely bride, Meghan! May they enjoy many years of love and happiness together, the same felicity enjoyed by Prince Harry's distant ancestors, King George III and Queen Charlotte, and his grandparents, Queen Elizabeth and Prince Phillip. 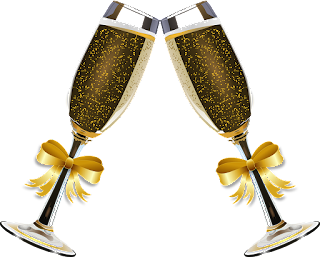 Photos courtesy of Wikimedia Commons and Pixabay
at May 18, 2018