Halloween fortune-telling games during the Regency and beyond 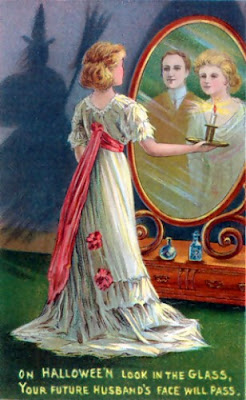 Forget Valentine’s Day. In centuries past, it was Halloween when romantic young people got their marital hopes up, especially in the British Isles.

On Halloween night, young folks of centuries past used nuts, apples, and mirrors to try to determine who and when they would wed.

There were a few different types of popular fortune-telling or divination rituals that were played on Halloween. One way was to write the name of your sweetheart on a hazelnut and throw it in the fire. If it burned steadily your love was true. If it popped and jumped out of the fire, well, that was clearly a sign that your sweetie was unreliable.

If you were having your hard time picking between two suitors, you'd get three nuts to put on the fire grate – one for you, and the other two for the contenders. The nut that stayed beside you indicted who'd be your best bet.

And finally, if you’d already selected your nut, er, future spouse, you could put two nuts on the grate, one for each of you, and watch how they burn. If the nuts burned steadily side by side it meant a happy marriage was in the offing. If one of the nuts rolled away or burst open, you’d better rethink your choice.

A version of this game is described in the Scottish poet Robert Burns’ poem, Halloween. Written in 1785 and published the following year, the poem paints a picture of a fun-filled Halloween party, centering on a few ghostly scares and some light-hearted fortune-telling.

More importantly, if Burns and his pals were playing these games in 1785, it’s very likely these same traditions were practiced during the Regency, especially in rural areas.

Here’s a bit of Halloween, translated from the Old Scottish dialect Burns used into modern English.

The old goodwife’s well-hoarded nuts,
Are round and round divided,
And many lads' and lasses' fates
Are there that night decided:
Some kindle cozily, side by side,
And burn together trimly;
Some start away, with saucy pride,
And jump out over the chimney

Apples, which like nuts were plentiful around harvest time, also played a role in Halloween fortune-telling games. There were many ways the humble apple was used to foretell marital fortunes.


For example, if a maiden peeled an apple in one continuous strip on Halloween night and tossed the long peel over her shoulder, the shape it landed in would be the shape of the first initial of her true love's name. I can well imagine that a determined lass would pare several apples if necessary to get the results she wanted.

Snap-Apple is another popular Halloween party game of years past. In this game, apples were hung from the ceiling with string or ribbon. Players would have their hands tied behind their backs and try to use their teeth to grab a suspended apple. The first player to bite an apple would also be the first to get married.

For those of bolder temperaments, there was another way to play this game. You’d get a stick and impale the apple on one side and affix an upright candle on the other. The stick would then be hung carefully from the ceiling, the apple and candle balancing each other on the ends.

Then the game gets more interesting. The candle is lit, the stick is spun. Players, still with their hands tied behind their back, try to bite the apple and avoid the flame.

If you managed to bite the apple, good luck would be yours. But if you were scorched by the flame, you could expect some bad luck in the following year. Although I think getting burned at a party should be enough bad luck for anyone, at least a while. 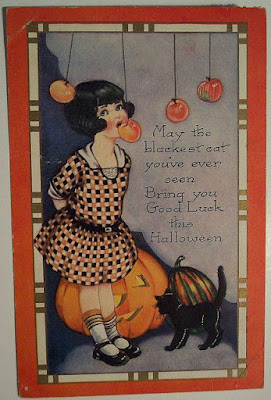 And we cannot forget the Halloween classic game of bobbing for apples. One way this party activity was done in the past involved having the players write the names of their desired sweethearts on the apples before setting them afloat in the tub.

With their hands tied behind their backs (I’ve noticed that a lot of these games involve tying hands behind backs) players immerse their faces in the water, trying to grab an apple with their mouths. The sooner you sunk your teeth into the apple with your sweetheart’s name on it, the more successful your pursuit would be. If it took too long to bite the right piece of fruit, either the person you wanted was going to be too much trouble to go after or you weren’t meant for each other.

But mirrors may have been the most popular, and certainly the creepiest, way to look into the future on Halloween. There are many different variations of this method of fortune-telling, but in its simplest form, a young woman would look into a mirror at midnight in the hope of seeing a reflection of her future husband. 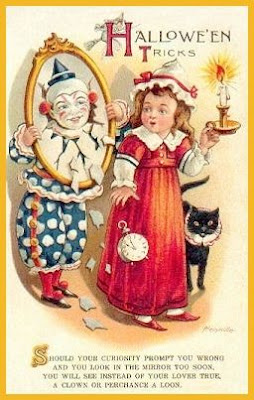 And it had to be right at midnight. One vintage card warns against looking into the mirror too early. An impatient maiden was apt to see a “clown or a loon” if she jumped the gun. And when you’re hoping to see a handsome suitor, a clown was a scary prospect even before evil clowns became a terrifying Halloween cliché (thanks to Stephen King's horror novel It).

One elaborate version of this ritual requires a young woman to back down the cellar steps, in the dark, holding a candle in one hand and a mirror in the other. Imagine doing that in a long skirt! In addition to juggling the mirror and the candle, she had to have a mouthful of salt for the charm to work.

If it were me, I don’t think I’d be coordinated enough to pull this stunt off. But, if a young lady did manage to get down the stairs without any mishaps, when she got to the bottom (in my case, it’d be more like if I got to the bottom) she could look into her mirror and see her future husband gazing at her over her shoulder.

Again, if this were me and I made it that far, I’d probably scream at the supernatural vision and spit salt everywhere.

There’s no record of how many times these games accurately predicted the future, although I’m sure there was many a gullible young miss who claimed to see her soul mate in the mirror at midnight. As far as I’m concerned, if she was willing to walk backward down a rickety staircase in the dark carrying an open flame, and she made it without tripping or setting herself on fire, she could claim whatever she wanted.

There are many other rituals, good luck charms and fortune-telling games people have enjoyed at Halloween over the centuries. They all make our current customs of trick-or-treating or watching scary movies look pretty tame.

So, this October 31 grab a handful of nuts, an apple or two, and a mirror, and if you're lucky perhaps you’ll catch a glimpse of your future on Halloween night. Of course, when our ancestors played these fortune-telling games they ran the risk of getting burned by a hot nut, choking on an apple, or setting their clothes on fire.

With all those potential hazards, I think their Halloween celebrations were a lot scarier than ours! 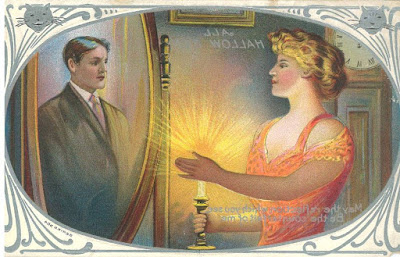 Resources for this post include:
Images from Wikimedia Commons