Downton Abbey and the Regency

Are you a Downton Abbey fan? I am, and I’m impatient for Season 4 to begin here in the U.S. Waiting for the new shows gives me plenty of time to consider how the world of Downton Abbey resembles the Regency era. Here are just a few of the similarities the two worlds share:

A class-ridden society at their core

The Regency had its "beau monde," the roughly 10,000 or so aristocrats in the upper tier of society whom the working classes (the majority of the population) served. The class divide at Downton Abbey is illustrated by how hard the servants who live downstairs must labor to keep the household running while Lord Grantham and his family enjoy a busy social schedule of lavish dinners, balls and house parties.

Though the Regency is known for both its social elegance and decadence it was still very possible to be ostracized from polite society for straying too far beyond the rules of good behavior. Even celebrities weren't immune from a scandal's effects. For example, the poet Lord Byron had many love affairs with married women, but society's reaction to his liaison with his half-sister drove him out of England.

In Downton Abbey, Lady's Mary's midnight fling with the Turkish envoy who died in her bed almost ruined her. Cousin Violet and Cora had to use all their influence to suppress any whiff of scandal. And who can forget the furor Lady Sybil caused by running away with the chauffeur? Certainly not Lord Grantham. After his daughter married a man regarded by society as her social inferior, Lord Grantham didn't try to stop Sybil from leaving England to begin a new life.

The effects of war and its aftermath

The Napoleonic Wars lasted a dozen years (1803-1815) and had a huge impact on the Regency period, reshaping the map of Europe. Downton Abbey depicts how the catastrophic loss of human life in World War I and the suffering endured by the survivors greatly affected those who came of age during the war, the so-called “lost generation.”

Though the Industrial Revolution began in the 1700s in Britain, it continued into the Regency period, bringing economic and social change in its wake. In addition, the excesses of the raucous Regency eventually led to a backlash and a new era of strict morality, ushered in by Queen Victoria’s reign (beginning in 1837). Over at Downton Abbey, Lord Grantham and his aristocratic peers also had to contend with social changes, such as the push for women's suffrage. They watched helplessly as their manor houses and former way of life disintegrated under post-war financial pressures. 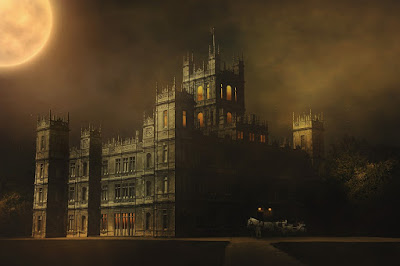 So, both the Regency period of the early 1800s and Downton Abbey's own time period of the early 1900s were transition periods of great social upheaval. By the end of each period wars and political conflicts had redrawn the map of Europe and fashions and social structures underwent transformations. These are fascinating periods to study because they are so dynamic.
If you haven't seen Downton Abbey yet, be sure to tune in. I'm sure you'll enjoy it!
***
Photos courtesy of Wikimedia Commons and Pixabay